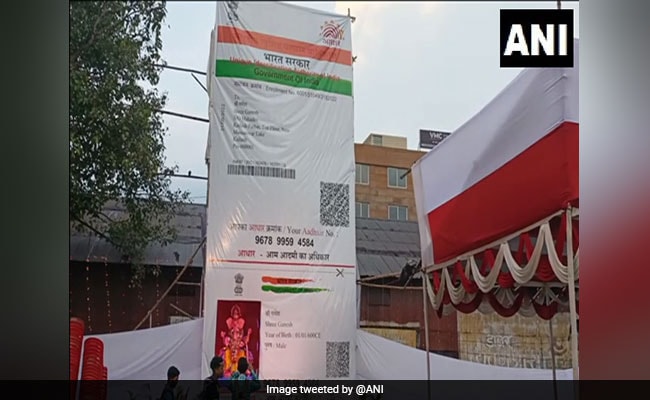 To commemorate the occasion of Ganesh Chaturthi, in Jamshedpur, Jharkhand, a pandal has been prepared in the shape of an Aadhaar card, identifying Lord Ganesha’s address in Kailash and his date of birth during the 6th century.

The Aadhar card contains a cut-out inside which an idol of the deity has been placed. On scanning the barcode present at its side, a Google link for Lord Ganesha images opens up on the screen.

The address mentioned on it is Shree Ganesh S/o Mahadev, Kailash Parbat, Top Floor, Near, Mansarover, Lake, Kailash Pincode- 000001 and the year of birth says 01/01/600CE.

This Ganesh pandal’s organiser, Sarav Kumar, while speaking to ANI revealed that he got the idea of making this Aadhar card-themed pandal after visiting one in Kolkata, where a Facebook theme pandal had been made.

He said, “One time when I was visiting Kolkata, there, I saw a Facebook pandal. Since I also do Ganesh pooja, it came to my mind that I too should do something unique. Hence, I got the idea of this Aadhar card pandal.”

Mr Kumar also aims to give an important message through his unique pandal. He is trying to convey that those who have not got their Aadhar cards made should get it done as soon as possible as it is an important document.

He added, “When God can have an Aadhar card then maybe the people who haven’t had theirs made might get inspired and follow suit.”

Several people were also spotted enjoying the unique themed Ganesh pandal and clicking photos and selfies with it.

The Ganesh Chaturthi festival is celebrated annually with great enthusiasm in India and thousands of devotees throng temples and ‘Ganeshotsav pandals’ to offer prayers.

This auspicious ten-day celebration, which commenced yesterday, starts with Chaturthi Tithi and ends on Anantha Chaturdashi. Devotees of Lord Ganesh, the god of wisdom and good fortune, mark his birth during the Shukla Paksha of Bhadrapada month.

“Real Danger Of United Nations Being Superseded By…”: India Warns