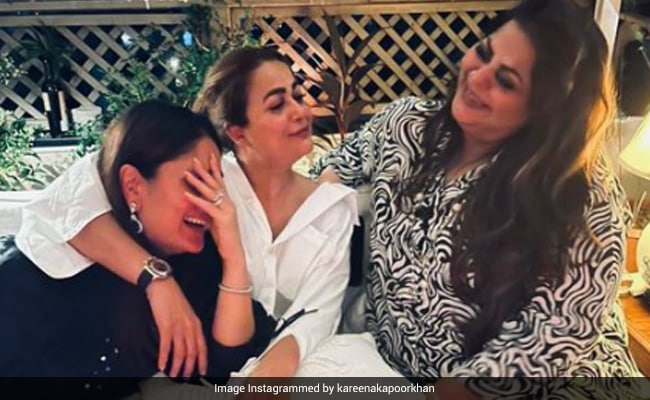 More pictures from Kareena Kapoor’s birthday bash have made their way to social media. The actress celebrated her 42nd birthday on September 21. Now, Kareena has shared a candid frame featuring herself and her BFFs Amrita Arora and Mallika Bhat on Instagram. In the caption, the actress said, “As we all know laughter is the best medicine…Nothing like a warm giggle with your BFFs.” For the hashtags, she wrote, “Keep laughing”, and “BFFs Forever”. Replying to the post, Amrita Arora said, “I love you.” Mallika Bhat has dropped a set of emojis. Director Zoya Akhtar left red heart and blush emojis under the post. The birthday party took place at Kareena and Saif Ali Khan’s Mumbai house.

Now, look at how Amrita Arora wished Kareena Kapoor on her birthday. She picked an oh-so-beautiful picture with Kareena and wrote, “Happy happy birthday my eternal pouter. Love you so much, Kareena Kapoor.”

Karisma Kapoor shared some major throwback moments from their childhood days to wish her sister Kareena Kapoor. The two are clearly winning the twinning game. Along with the pics, Karisma wrote, “To the bestest sister and my best friend. Happiest birthday. Always twinning and winning.”

Kareena Kapoor will be next seen in The Devotion of Suspect X. The Netflix film also marks Kareena’s OTT debut. The Sujoy Ghosh directorial is based on the Japanese novel of the same name by  Keigo Higashino. Vijay Varma and Jaideep Ahlawat will be seen in crucial roles.

Kareena Kapoor was last seen in Laal Singh Chaddha. The film, which is a Hindi adaptation of the all-time Hollywood Classic Forrest Gump, featured Aamir Khan as Laal. Kareena played the role of his love interest in the film, directed by Advait Chandan. Mona Singh and Naga Chaitanya were also part of the film.

Dhokha: Round D Corner Review: Subjects Audience, Actors And The Genre To A Massive Dhokha

Abhishek Bachchan’s Expression In Sister Shweta’s Post Is Everything

“We’re Definitely Going To Use In Our Future”

Tamannaah Dances The Garba With Fans