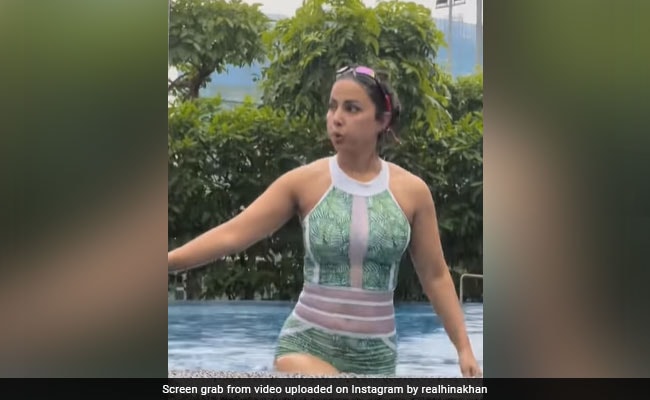 Hina Khan in a still from the video. (courtesy: realhinakhan)

When Hina Khan sets her mind on something, she is “unstoppable” and always finds a way to achieve it. Wondering what are we talking about? On Tuesday, Hina Khan showed us how she kick-started her week by swimming in the rain. The actress has posted a new reel on her Instagram profile and borrowed Sia’s 2016 song Unstoppable for the background music. In the slow-motion clip, Hina Khan is seen in green swimwear and goggles. She completes her swimming session, comes out of the pool and walks away. Sharing the video, Hina Khan wrote, “Unstoppable.”

Hina Khan rose to fame for her performances in TV series likeYeh Rishta Kya Kehlata Hai, Kasautii Zindagii Kay, Naagin 5,and the reality show Bigg Boss 11. She again featured on Bigg Boss 13 and 14 as a guest. Hina Khan was also critically acclaimed for her acting in the web series Damaged 2 and her stint in the reality show Khatron Ke Khiladi season 8.

Hina Khan, every now and then, posts mesmerising pictures of herself on social media. She picked up a dialogue of the lead character Geet from the 2007 film Jab We Met for a bunch of pictures featuring her in a yellow dress with green prints. “Mai apni favourite hoon,” the actress wrote in the caption.

Apart from treating us to stunning pictures of herself, Hina Khan also shares snippets from her fitness album. A couple of days ago, she posted these images of herself performing aerial yoga and wrote, “Hang in there darling, you’ve got this. Breathe.”

Hina Khan stepped into films with Lines, which premiered last year on Voot. Her latest movie is titled Country of Blind. The poster was unveiled at the Cannes Film Festival earlier this year. Hina Khan was last seen in a music video titled Runjhun. She co-starred with Shaheer Sheikh in the song.

Nutritionist-Approved Health Benefits Of Sugarcane Juice: 5 Recipes For You

Ahead Of IFFI 2022, Sara Ali Khan And Varun Dhawan Are Enjoying A Beach Day In Goa. See Post