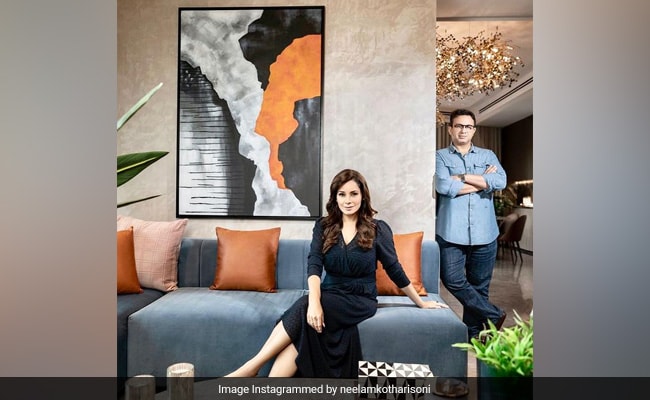 Neelam Kothari is a woman of many hats. Besides being an actor, she is also a jewelry designer. Neelam Kothari is also an interior decorator now. The Fabulous Lives Of Bollywood Wives star shared pictures of her new project on her Instagram profile on Tuesday. Neelam Kothari captioned her post: “From facing the camera to designing jewelry and now my new foray into interior designing! I’m loving every bit of it….Be it creation, art, design I have found my true calling. Blessed.” She added in her caption: “A sneak peek into a project we just completed.”

Neelam Kothari got a huge shout out from her friends. In the comments section of Neelam’s post, Raveena Tandon wrote: “Success always.” Seema Sajdeh and Bhavana Pandey, who have been friends with Neelam for the longest time and also worked with her in Fabulous Lives Of Bollywood Wives, dropped clap emojis in the comments section.

Neelam Kothari stepped into the industry with the 1984 film Jawaani. She is best known for her work in films such as Khudgarz, Agneepath, Gharana, Love 86 and Sindoor among others. She will also feature in Zoya Akhtar’s Made In Heaven series.

Neelam Fabulous was last seen in Lives Of Bollywood Wives 2, a Netflix series based on the lives of four star-wives – Seema Sajdeh (previously married to Sohail Khan), Maheep Kapoor (Sanjay Kapoor’s wife), Bhavana Pandey (wife of Chunky Pandey) and Neelam Kothari (married to Samir Soni). The series premiered on Netflix earlier this month and it has been produced by Karan Johar’s Dharma Productions.

When Deepika Padukone, Shah Rukh Khan Dance, So Does Everyone Else