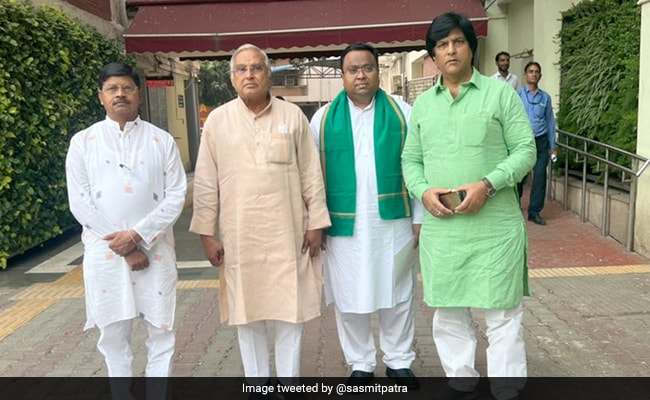 A delegation of BJD leaders led by party MP Sasmit Patra today met top Election Commission officials  and submitted a complaint against BJP leaders and workers from Odisha for allegedly indulging in electoral “illegalities” and “malpractices” in the Dhamnagar Assembly bypoll.

The by-election to the Dhamnagar assembly seat in Odisha is scheduled to be held on November 3.

The BJD leaders, in the memorandum, alleged that “fake and fictitious videos are being manufactured by Odisha BJP leaders and being circulated on social media stating that Mission Shakti (Women Self-Help Group) members or popularly known as Mission Shakti Maa are distributing money in this election.” Mr Patra said the BJP Odisha leaders are “not only defaming them and tarnishing their image but also doing a great disservice to the women of Odisha and the nation”.

He also alleged that a huge “money power is being used by Odisha BJP leaders and workers to illegally influence the voters of Dhamnagar”.

Whenever the BJP Odisha realises its upcoming electoral defeat, as is in this case of the Dhamnagar Assembly bypoll, “they immediately start pumping illegal cash to influence voters,” Mr Patra alleged.

The BJD also termed the allegations made by the BJP against the local administration in Odisha as “fake and false”.

The BJP Odisha has become an “expert” in vilifying and tarnishing the image of the local administration by indulging in fake and false allegations against it, Mr Patra said.

The BJD’s complaint to the poll panel came a day after a BJP delegation led by Union Minister Dharamendra Pradhan submitted a memorandum against the Odisha’s ruling party.

2 Cyclists Killed After Being Hit By Car In Gurgaon, Driver Arrested