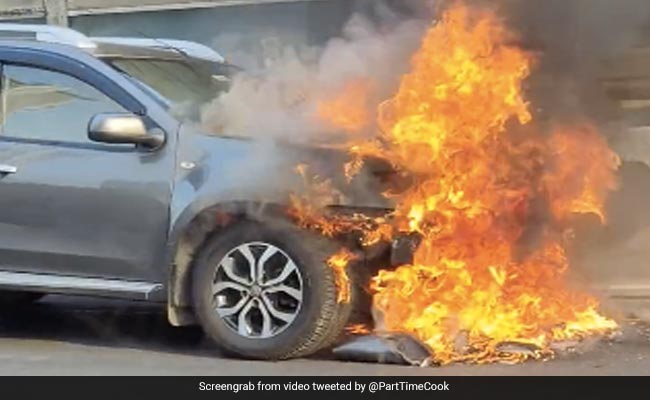 The car caught fire on a flyover in Mumbai.

A car caught fire on a flyover in Matunga area of central Mumbai on Tuesday, and no casualties were reported in the incident, a civic official.

The car with two occupants was on Dr Babasaheb Ambedkar Road around 4.45 pm, when smoke started emanating from the vehicle’s engine, the official said.

The vehicle was immediately halted and the occupants alighted safely. Within a few seconds, the car was engulfed in flames, he said.

A car has caught fire on matunga bridge. Traffic to South Bombay is jammed, don’t take the bridge. @WeAreMumbai@MumbaiPolice#Mumbaipic.twitter.com/j0kUInuqGB

The police and fire fighters reached the scene and doused the blaze, which had burnt the car completely, the official said.

Traffic on the arterial road was affected for close to 30 minutes due to the blaze, he added.

Elon Musk Found “#StayWoke” Tees At Twitter Office. He Changed Them To…