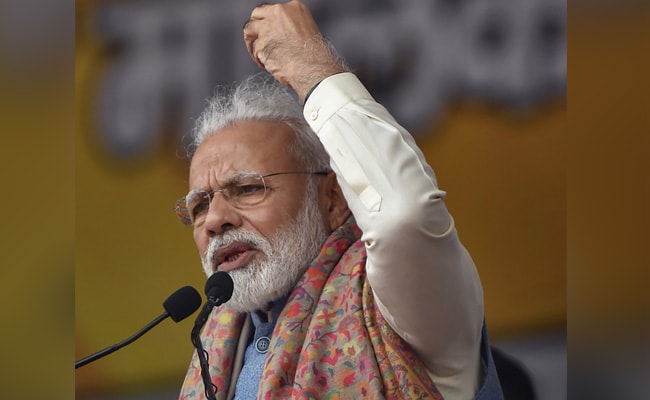 Modi government is always in electioneering mode having no focus on economic issues, Congress said.

The Congress on Thursday hit out at the Narendra Modi government over the “continuous fall” of the Indian Rupee and accused it of always being in electioneering mode and having no focus on economic issues.

Noting that mere statements will not work, the party also suggested that Prime Minister Modi convenes an immediate meeting with experts to take remedial measures in this matter.

The Congress’ president-elect Mallikarjun Kharge said the rupee again reached a record low of Rs 83 against the dollar, noting that it can prove to be “very dangerous” for India’s economy.

“The (Union) finance minister said that the rupee is not weakening, the dollar is getting stronger. Mere statements will not work, the central government will have to take concrete steps soon,” Mr Kharge said in a tweet in Hindi.

Congress leader and former finance minister P Chidambaram said the Government seems “helpless against the relentless decline” in the value of the Rupee. He said the declining Rupee has consequences for inflation, current account deficit and interest rates.

“At this moment, the government needs all the wisdom and experience available in the country. I have suggested a group of eminent professionals who have the interest of the country at heart,” he said on Twitter.

“My advice to the prime minister is he should immediately call a closed-door meeting of Dr C Rangarajan, Dr Y V Reddy, Dr Rakesh Mohan, Dr Raghuram Rajan and Mr Montek Singh Ahluwalia to consider the next steps that the government may take. Obviously, the FM and the Governor, RBI should be present,” Mr Chidambaram suggested in another tweet.

Alleging that the “inept” Modi dispensation is clueless about macroeconomic management, Congress leader Anshul Avijit feared that the worst on the economic front is yet to come.

He said the Rupee “continues its free-fall against the dollar with disastrous consequences for our fragile economy”, as it has now breached the Rs 83 mark versus the US dollar and shows no signs of abating.

The Congress leader claimed the Rupee has fallen more than 10 per cent so far in this calendar year and has reached lows of Rs 83.12. By comparison, during the UPA, the Rupee was Rs 58.4 to a dollar in May 2014 on the eve of Narendra Modi becoming prime minister, he said.

The Rupee depreciated 6 paise to a record low of 83.06 against the US dollar in opening trade on Thursday due to a stronger greenback overseas and unrelenting foreign fund outflows.

“This is the proverbial perfect storm – weakening rupee, high levels of inflation, rising unemployment, poverty and hunger. The inept Modi government is clueless about macroeconomic management as this government is always in electioneering mode having no focus or concern on the economic issues. We fear the worst is yet to come,” Mr Avijit told reporters.

The Congress leader said PM Modi has completely forgotten his own narrative when the BJP was in opposition and recalled his words on August 20, 2013, when he as Gujarat chief minister had said: “It is unfortunate that the leadership in Delhi is neither bothered about the security of the country nor about the decline in the value of the rupee.” “With China in our territory and the rupee-affected inflation, the irony of Shri Modi’s statement cannot be starker,” Mr Avijit noted.

The Congress leader also hit out at Finance Minister Nirmala Sitharaman, saying, “With her irresponsible and misguided statements, she is not ready to accept the reality of this government’s failure to control the falling rupee.” “Her comparisons with developed countries having smaller populations and much higher GDP per capita than India are grossly misplaced.” Claiming that the falling Rupee has an inverse relationship with inflation levels, Mr Avijit said according to the RBI, a 5 per cent weakening of the rupee increases inflation by 20 bps.

That is because imports, in particular, fuel, fertilisers and cooking oil, become that much costlier. These commodities directly affect the common man and have a cascading effect on prices, he noted.

“The finance minister’s outrageous comment that, ‘Rupee is not sliding and the dollar is strengthening’, ignores the fact that emerging economies such as Mexico and Brazil have actually strengthened their currencies vis a vis USD during this critical period. Further, the US policy regarding the dollar volatility is well encapsulated in former treasury secretary John Connally’s famous statement in 1971: ‘The dollar is our currency, but it’s your problem’,” he noted.

“The finance minister, true to form, has refused to acknowledge that there is a ‘problem’ with her government’s misdirected policies and therefore refused to act on it,” Mr Avijit said, adding India’s forex reserves have depleted by 15.4 per cent in 2022 only with more than USD 110 billion having left the shores of this country.

The weakening rupee, strengthening of the dollar and US interest rate hikes have also resulted in Foreign Institutional Investors (FII) rapidly pulling out, he said, noting that in this calendar year, FII have sold over USD 24 billion in local equities.

Omicron Variant May Cause Another Covid Wave: WHO Chief Scientist