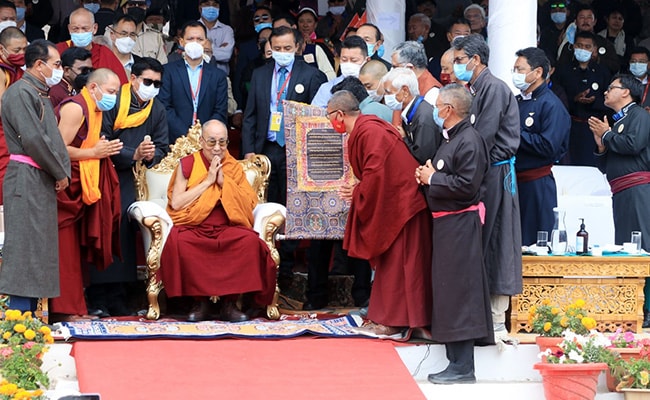 The MPs are planning to meet the Dalai Lama at Dharamshala on September 2.(File)

The All-Party Indian Parliamentary Forum for Tibet, an informal group of Members of Parliament (MPs), has decided to request the centre to confer Bharat Ratna on the Dalai Lama, its convener Biju Janata Dal (BJD) MP Sujeet Kumar said Saturday.

Some members of the forum also expressed solidarity with Taiwan amid China’s military muscle-flexing in the Taiwan Strait following US House Speaker Nancy Pelosi’s visit to Taipei.

The forum, which comprises 22 MPs, is planning to meet the Dalai Lama at Dharamshala on September 2, Tibetan Democracy Day, and also attend the parliament session of the Tibetan government in exile for a day or two, Sujeet Kumar said.

The parliament session of the Tibetan government-in-exile is from September 7 to 16.

Sujeet Kumar, who was recently appointed the convenor of the All-Party Indian Parliamentary Forum for Tibet, said the group was almost defunct for several years, but it is being revived now.

“The forum was very active when George Fernandes was its convenor. Later, I think it got defunct, it was not very active. Now, it is being revived. We have plans to visit Dharamshala and meet his holiness the Dalai Lama. We also want to talk about the cultural genocide in Tibet,” he said.

The second meeting of the forum on August 3, after its revival last year, was attended by 12 MPs including BJP’s Sushil Modi, Rajendra Agrawal, Tapir Gao, and Union Minister and Republican Party of India(RPI) leader Ramdas Athawale.

“In the meeting, the forum passed a resolution to press upon the Union government to confer Bharat Ratna on His Holiness the Dalai Lama and he should be invited to address the joint sitting of both Houses of the Indian parliament,” Sujeet Kumar told PTI.

A few of the members of the forum also expressed solidarity with Taiwan.

“Taiwan is a proud and vibrant democracy. China is trying to bully and intimidate it. So we felt the need to express solidarity with the people and government of Taiwan,” the BJD MP said.

Sujeet Kumar said he has prepared a private member Bill titled ‘Tibet Policy Act’, which seeks to appoint a special coordinator by the Indian government on Tibetan-related issues.

It also proposes to allocate Rs 30 lakh in the Union Budget to assist the democratic activities of Tibetan refugees in India.

Following the revival of the forum last year, some of its member MPs attended a dinner hosted by the Tibetan Parliament-in-exile and its speaker. After that, the Chinese Embassy in Delhi wrote to MPs, suggesting they refrain from providing support to Tibetan forces.

Russia Accuses Kyiv Of Poisoning Some Of Its Soldiers In Ukraine

I take care of my ill father without any help from my brother. Can he stake claim to my father’s property?