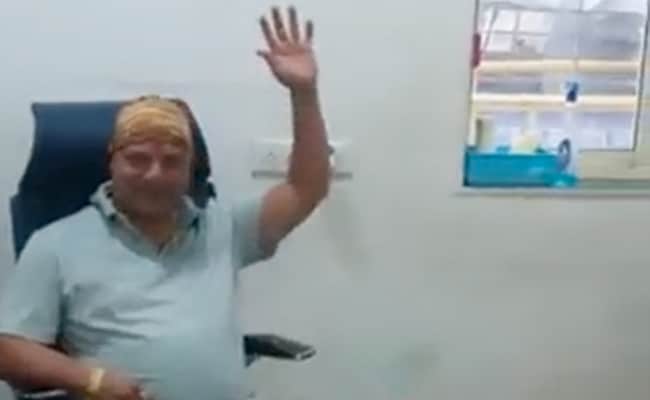 Policemen from the same police station arrested him after the video went viral, and locked him up.

A Maharashtra man was arrested by the police after a video of him sitting on a police officer’s chair went viral on social media. The accused, Suresh Patil, was in the Manpada police station in connection with a complaint when he recorded the video, which has a dialogue in the background, to which he is acting.

“Rani nahin hai to kya hua, ye Badshah aaj bhi lakhon dilon pe raaj karta hai (So what if I don’t have a queen, this emperor still rules over lakhs of hearts),” it says.

Suresh Patil, a local builder and businessman, added the clip to another video where he is waving a gun in the company of his friends.

Policemen from the same police station arrested him after the video went viral, and locked him up.

Manpada police have registered a case charging him for impersonating a public servant, defamation, endangering lives, and also under the Arms Act.

Suresh Pandurang Patil alias Chaudhary was produced in the court, which sent him to police custody till November 4.

According to the police, Suresh Patil is a complainant in a case of human sacrifice and superstition registered at the Manpada police station. The accused in the case had seized Rs 19.96 lakh from him, and he had reached the police station to collect it after a court order.

Seven criminal cases are registered against the accused Suresh Patil in different police stations, police said, adding that they have also seized his licensed gun, and recovered five live cartridges, a machete, and a Mercedes car.

Tech View: Nifty forms Doji candle on daily charts. What traders should do on Wednesday

“Kashmiris Will Fight Aggressors Like in 1947”: Mehbooba Mufti Warns Centre

Show Humane Approach To Our Fishermen