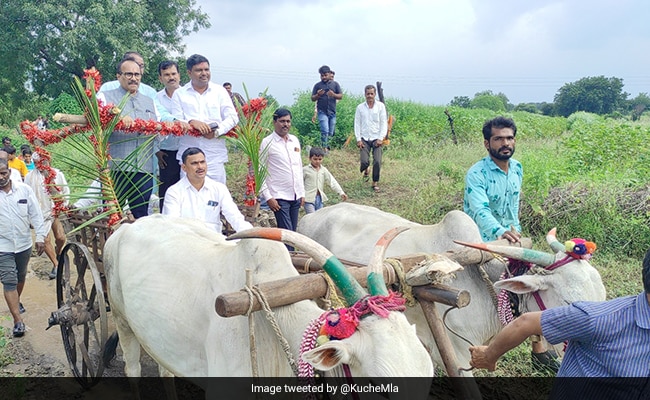 Maharashtra minister Atul Save has drawn flak from the Opposition for allegedly touring rain-affected villages in the Jalna district in a decorated bullock cart to assess crop damages.

Mr Save, who is the guardian minister of the Jalna district, toured the rain-affected villages in Badnapur and Ambad tehsils along with local MLA Narayan Kuche on Sunday.

Opposition leaders, however, criticised the minister for touring the affected areas in a decorated bullock cart.

Accusing the minister of being insensitive towards farmers, Shiv Sena MLC and Leader of Opposition in the legislative council Ambadas Danve said it seemed as though Mr Save was going to attend some celebration or festival.

Speaking to reporters, Swabhimani Shetkari Sanghatana (SSS) chief Raju Shetti said that instead of comforting and providing relief to farmers who faced crop losses, the minister had rubbed salt into their wounds.

According to authorities, Badnapur and Ambad tehsils received 130 mm and 133 mm rainfall respectively. Crops such as soybean, pulses, and vegetables were destroyed due to excess rainfall in the district.

Centre On US Official’s Reference To PM Modi

After Hijab Row, Proposed Halal Ban Could Be Karnataka’s Next Big Controversy