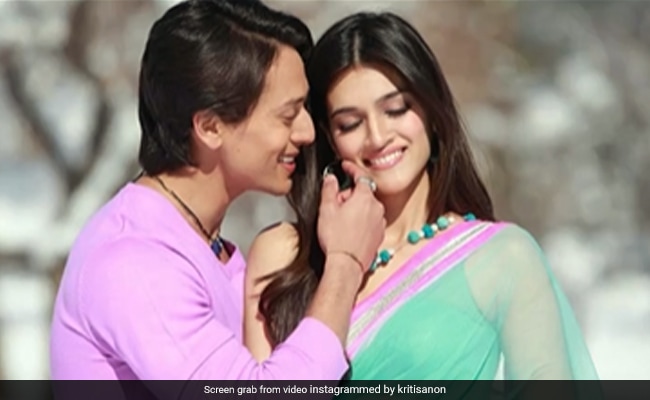 Kriti Sanon and Tiger Shroff, who made their Bollywood debuts together in 2014, shared the couch on Karan Johar’s show Koffee With Karan 7 recently, where they talked about their equation. The actors, who will work together in Ganapath, were asked by show’s host Karan Johar: “What I am intrigued about and what I am always intrigued about and it’s really a cardinal rule. You work with your lead actor on your first film and you get into a relationship.” Tiger Shroff quickly added, “She was already taken,” to which Kriti Sanon replied, “Excuse me? No, I wasn’t.” KJo added, “Is that why you never had a vibe with her? Because there was no reported relationship between Tiger and Kriti?” Tiger Shroff explained, “I think both of us were very shy.”

Kriti Sanon added, “You know, we exchanged numbers after our first schedule.” Karan Johar asked once again: “So there was no vibe?” To this Tiger replied, “Even if I tried, I don’t think I would have gone lucky with Kriti. She’s… Look at her. I mean Kriti.”

Karan Johar then asked Kriti Sanon if she got upset that Tiger “never made any kind of advances” at her. Kriti’s answer: “No, I didn’t get upset. I understood because he was very, very shy. Extremely shy. To the extent, I remember we had this shot in Heropanti where he is supposed to peck me on the cheek and I remember, he was trembling at that point and he was like that aww sweet, you know, like really, really shy but he was friendly on set.”

Heropanti marked the Bollywood debuts of Tiger Shroff and Kriti Sanon in Bollywood. The film was directed by Sabbir Khan and it was produced by Sajid Nadiadwala. The second installment of the film , featured Tiger alongside Tara Sutaria and it was a box office debacle.

The Many Moods Of Pooja Hegde