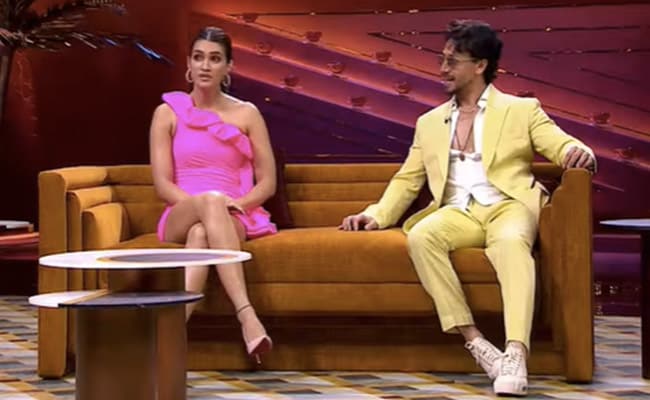 Karan Johar has dropped the promo of the new episode of Koffee With Karan, and this time the “original” Heropanti couple, Tiger Shroff and Kriti Sanon will appear on the show. On the show, the actors reveal some juicy details leading to an “oops” moment, such as when KJo asked Kriti if she was rejected from auditions prior to Heropanti 1, to this, the actress said, “You know my first audition was actually for Student of the Year 1,” leaving Karan speechless. He just said one word “oops” (describing the awkward situation). Student of the Year 1 (SOTY) marked the debut of Varun Dhawan, Alia Bhatt and Sidharth Malhotra.

Next, Karan Johar asked Kriti if she was upset that Tiger Shroff didn’t make any “advance” (romantically), to this, Tiger said, “She was already taken,” leaving Kriti all surprised. However, Kriti didn’t back down and added, “I wouldn’t date him, he flips too much”.

During the rapid-fire session, KJo asked Tiger what he envies about Ranveer Singh, he said, “his wife (Deepika Padukone)”. The reason: “Because she is so talented and very pretty”.

“Lots of heropanti, flipping conversations and giggles on this episode with this duo!” read Karan Johar’s caption.

Take a look at the new promo of Koffee With Karan 7:

Kriti Sanon and Tiger Shroff made their debut with the movie Heropanti in 2014, which was well received by the audience. Now, they both will share the screen space for the second time in Ganapath.

Coming back to Koffee With Karan 7, the episode featuring Kriti Sanon and Tiger Shroff will feature on Thursday (September 1) on Disney+Hotstar.

How To Make Buttermilk Fried Chicken

Weight Loss: 5 Delicious Low Fat Salads With No Cream And No Cheese

“We Were Restricted By Covid”

How Shah Rukh Khan, Varun Dhawan And Other Stars Reacted To Virat Kohli’s Knock Against Pakistan