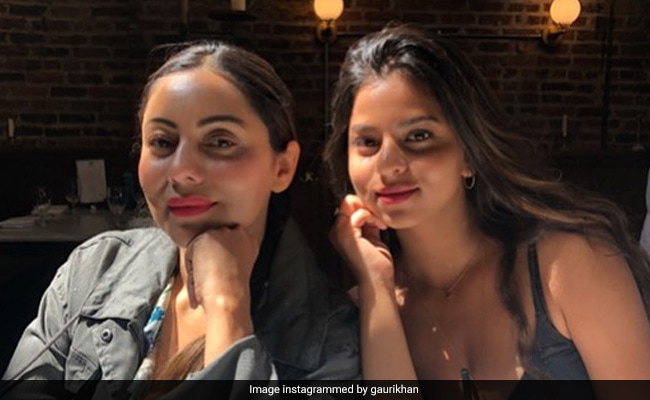 On the latest episode of Koffee With Karan 7, Shah Rukh Khan and Gauri Khan’s daughter Suhana Khan had a special message for her mom, who was one of the guests on the show. Suhana had sent a voice note for Gauri Khan. She revealed that Gauri Khan is really bad at keeping secrets. “My mum has this really bad habit of revealing secrets by accident. Unless you tell her about 500 times that this is the most confidential piece of information, she will accidentally spill it. So we all have to tell her a million times,” she said. Suhana recalled an incident and she added: “This one time, I was on a phone with her and I was telling her Promise me you’re not going to say anything to anyone. And AbRam (Suhana’s brother) was behind her and he was just like, ‘No, she’s going to tell. She tells all my secrets to all her friends.’ I am like he’s 9 and he’s picked up on it. That’s a really annoying thing that she does and I feel like I have got this habit from her but I am not as bad as her.”

Describing her mother, Suhana Khan said, “She is also a kind of a momager like she wants to see everything before everybody else can see it. Sometimes I am like ahhhhh let me just post one picture without showing it to you first, but I always send it to her because I know she is always right.”

Suhana also recalled a hilarious incident. She revealed that whenever Gauri Khan is on a vacation and she is not in the mood to interact with people, she pretends as if she does not understand English. “She’ll be walking on the streets pf London or New York and someone will ask her for directions and she will pretend like she can’t speak English because she doesn’t want to talk to people. So she’ll walk off,” recalled Suhana.

She added, “She doesn’t have to care about who is around and what she has to do to fit in. She just doesn’t do any of that.” Suhana also revealed that Gauri Khan loves to fill her wardrobe with comfortable clothes and she takes the pajamas that she is given at British Airways and Jet Airways and wears them at home, and every night to bed. She revealed that later Maheep Kapoor and Bhavana Pandey also started doing the same.

Suhana Khan, daughter of superstar Shah Rukh Khan and interior decorator Gauri Khan, completed her higher studies from New York. Before that she studied films at Ardingly College. Suhana Khan, who has also done theatre shows in the past, featured in a short film titled The Grey Part Of Blue, directed by Theodore Gimeno.

Cooking Hack: Make Macaroni And Cheese In Rice Cooker With This Easy Recipe

7 Classic Street Foods You Can Recreate At Home With Curd