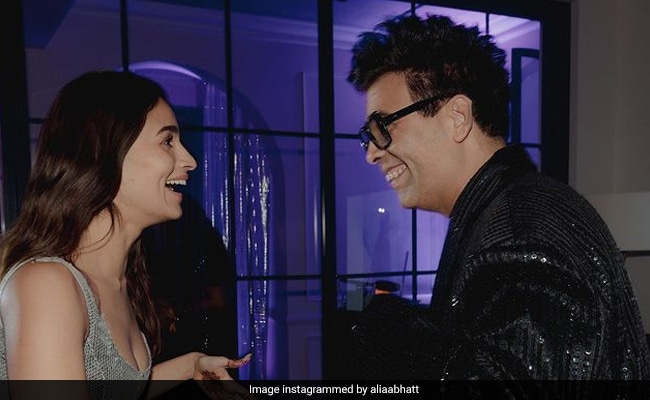 In the season finale of Koffee With Karan 7, Karan Johar welcomed Tanmay Bhatt, Danish Sait, Kusha Kapila, and Niharika NM as his guests, who also doubled up as members of the jury for the Koffee Awards. Karan Johar’s habit of name-checking Alia Bhatt in almost all episodes was addressed during the episode. “They say I talk a lot about Alia Bhatt, do I?” asked Karan Johar. Danish’s ROFL reply was this: “I watched Brahmastra and it in Alia Bhatt keeps screaming ‘Shiva… Shiva..’ The equivalent of that on television is you saying Alia.” Karan Johar revealed during the show that Alia Bhatt had also told the filmmaker that he can’t name her on the show anymore.

In a latter section of the episode, when Karan Johar called Alia Bhatt to tell her that she and Ranveer Singh had won the Koffee With Karan 7 Best Episode award, he also told her that he has been schooled by the jury for name dropping her so much, to which Alia said, “Even I told you that.” The actress added, “Basically you can never take my name ever again. You have to swear, never ever. Just say mean things about me from now on,” Alia said to which KJo asked if they should have a mock fight on Twitter. Alia replied saying, “Let’s have a fallout.”

When Danish Sait spoke to Alia Bhatt on the phone, he asked her if she could say her most famous dialogue “Shiva” from Brahmastra. Alia, being a sport, did say the dialogue in fact. She joked that she told Ayan Mukerji that people can have a drinking game for the number of times her character Isha says Shiva in Brahmastra.

Alia Bhatt was launched by Karan Johar in Bollywood with the 2012 film Student Of The Year, alongside Varun Dhawan and Sidharth Malhotra. She has starred in multiple Dharma Productions projects, the latest one being Brahmastra. Alia will work with KJo once again in Rocky Aur Rani Ki Prem Kahani, co-starring Ranveer Singh.

Malaika Arora, Janhvi Kapoor And Other Stars Spent Monday Working Out. You?

Shahid Kapoor Has “Only Jhappis And Pappis” For Brother Ishaan Khatter