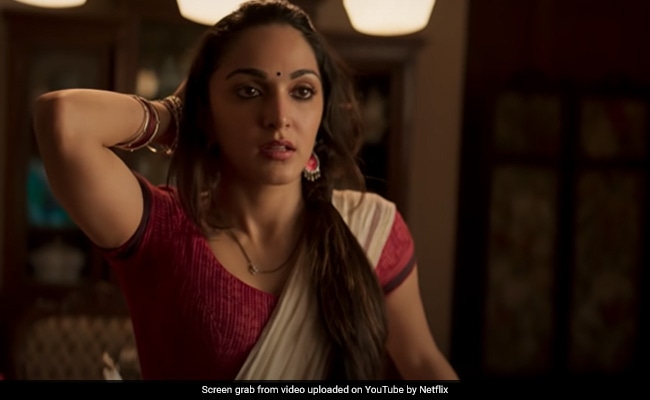 Kiara Advani in a still from Lust Stories. (courtesy YouTube)

Kiara Advani and Shahid Kapoor graced the Koffee couch in this week’s episode and the duo made sure the show was entertaining throughout with their funny, heartfelt and quirky revelations and stories. One of the things that got out in the public domain on the show was that Kiara’s role in her Netflix project Lust Stories was earlier offered to Kriti Sanon. Karan Johar directed his short film in the anthology that had Kiara Advani and Vicky Kaushal in the lead role. In the film, Kiara’s character Megha has an orgasm in front of the whole family and Kiara was appreciated for her acting skills and the way she pulled off that particular part.

While speaking about the film and how it made Kiara stand out as an actor in the series, Karan Johar revealed that he had a hard time finding someone to play the part. He said that he first offered the part to Kriti Sanon.

Karan said, “I had offered it to Kriti Sanon, the role…and she said that her mom didn’t allow her.”

Karan continued, “I thought everybody’s mom would stand in line, not allowing their daughters. It’s actually a very empowering story. It’s about a woman’s right to pleasure. So I met Kiara at Manish Malhotra’s house, and I just saw her, I knew her of course, I knew her as Alia Advani then…so I met her and I asked can you come tomorrow and meet me, it’s for a short film. She came and she heard it and then she was a little zoned out.

“She said, are you directing it? I said yes. Then she said, yeah! I’m doing it!” Kiara then admitted that she did the movie because Karan was directing it. She said, “I have to say that when I signed the film, it was only to work with Karan Johar.”

“Your Light Will Shine In Me Forever”