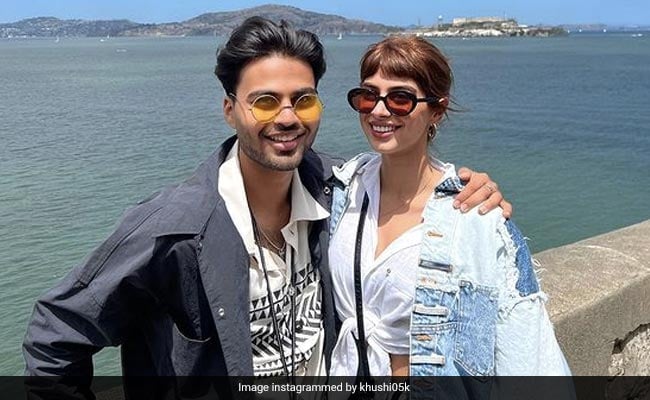 Janhvi Kapoor’s younger sister Khushi Kapoor is currently holidaying in the US. On Wednesday, she shared several photos on her Instagram handle, offering a glimpse of her outing. From selfies to breathtaking views to the Post Malone concert, Khushi wrapped up her trip in one post and captioned it as: “Calliiiiiii”. It seems her sister Janhvi had a major FOMO (fear of missing out) as in the comment section, she wrote, “Excuse me,” followed by crying emoticons. Cousin Shanaya Kapoor commented, “What are u,” followed by love-struck emoticons. Aunt Maheep Kapoor also dropped heart and fire emoticons.

Khushi Kapoor keeps her Insta family updated by sharing her stunning pictures. A few days ago, she dropped a photo in which she looks gorgeous in a blue and green ensemble. Soon after she shared the post, her friends flooded the comment section. Sister Janhvi Kapoor wrote, “Excuse me!!!”. The Archies co-stars Suhana Khan and Mihir Ahuja commented, “Wowwwww” and “Elegant,” respectively. Aaliyah Kashyap wrote, “unreal,” while Anshula Kapoor and Sanjay Kapoor dropped fire and heart emoticons.

She also shared a sunkissed picture of herself while sipping a coffee on her couch. Check out the post below:

The Archies will release on Netflix next year.

Delhi Teen On Blue Scooter Used To Rob Women Walking Alone. How He Was Caught

A Page From Alaya F’s Yoga Diaries. She Keeps Getting Better

The Inspiration Behind Richa Chadha And Ali Fazal’s Wedding Invite