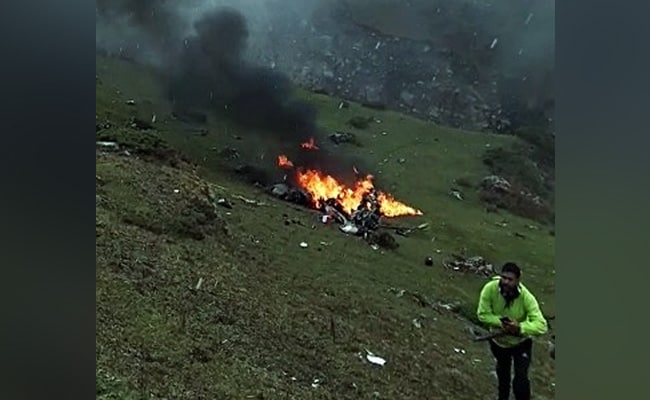 The helicopter came to pieces as it crashed and went up in flames, Mr Singh said.

The helicopter, which crashed near Kedarnath on Tuesday killing seven people on board, met with the accident hardly five-six seconds after taking off from the helipad near the Himalayan temple.

The chopper of Aryan Aviation Pvt Ltd hit a hillock amid dense fog and crashed within seconds after taking off near Garurchatti which is barely two km from Kedarnath, Manohar Singh, a security man deployed at Kedarnath helipad, said.

The helicopter came to pieces as it crashed and went up in flames, he said.

“Nothing was visible at once due to the thick blanket of fog enveloping the area but everyone ran in the direction from where a huge sound of crash came,” he said.

As the fog thinned away, the helicopter was seen in flames and its pieces were scattered all over the slopes of Garurchatti, Mr Singh said.

Ankur Shukla, a priest who happened to be at a distance from the crash site at the time of the accident, said when he saw the flames emanating from a big portion of the helicopter, he realised that a serious mishap had taken place.

Mr Shukla got to know the details of the crash when he returned to Kedarpuri.

Head of Six Sigma Healthcare firm Dr Pradeep Bhardwaj said low visibility caused by thick fog appears to have been the main cause of the accident.

Heli services in the area have increased manifold of late but a matching security and control mechanism has not yet been developed.

The Directorate General of Civil Aviation (DGCA) does not have an office here as yet, he said.

For Himachal Polls, BJP To Replace Several MLAs, Internal Vote Against Defectors Too