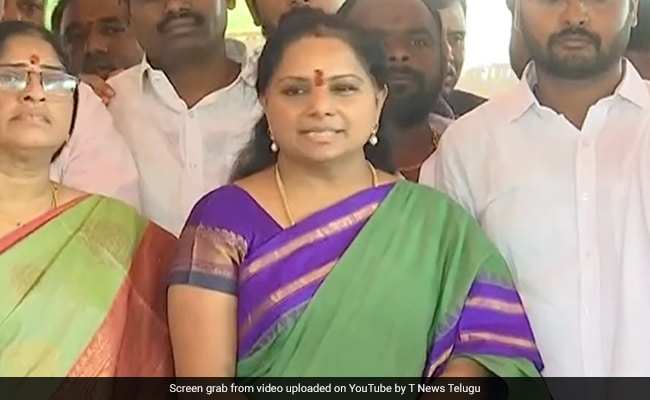 Ms Kavitha said that the BJP is “rattled” by criticism from KCR.

Reacting to the Bharatiya Janata Party’s allegation that Telangana Chief Minister K Chandrashekar Rao’s daughter and MLC K Kavitha was the “middleman” between the liquor mafia and the Aam Aadmi Party government in the Delhi excise policy case, Ms Kavitha has called the allegations “baseless” and claimed she has nothing to do with it.

“The allegations made on me by the BJP and its party people are completely baseless…They have all the agencies in their hands, they can do whatever investigation that is required. We will completely cooperate,” she said.

Ms Kavitha further said that BJP is “rattled” by criticism from KCR who has been “very vocal and sharp” in criticising the policies of the BJP-led union government, and thus it is trying to malign the reputation of her family.

The BJP alleged that a bribe of crores of rupees was given to Manish Sisodia to increase the commission from 2.5 per cent to 12 per cent under the new liquor policy and the first instalment of the same was given to him. BJP further alleged Rs 150 crore was given to Mr Sisodia.

Accusing Delhi Deputy Chief Minister Manish Sisodia of holding meetings with the Telangana leader, the BJP sought an answer from him if he had met Ms Kavitha.

BJP leader Parvesh Verma and Manjinder Singh Sirsa in a press conference today said that several meetings were held between the liquor mafia, ministers and officers to make the excise policy in line with them.

“The meeting was done in Oberoi Hotel in Delhi. The Delhi Excise officer, commissioner, Deputy CM Manish Sisodia, some liquor mafia and some political persons were the attendants of the meeting. KCR’s family members were present in the meeting. She had brought many members of the liquor mafia to meet Manish Sisodia. They came on a private plane. They had implemented the policy in Punjab. They had planned everything along with Arvind Kejriwal and Sisodia,” said Mr Verma

“Chief Minister Arvind Kejriwal and Excise Minister Manish Sisodia should explain why the commission of liquor sellers was increased by 10 per cent. He should also explain the relationship between him, K Kavitha and the members of the liquor mafia – Dinesh Arora, Vijay Nayar and Vijay Arora. And by collecting money from all this, Aman Dhal used to do the work of giving it to the Aam Aadmi Party. Which has liquor contracts in Delhi as well as in Punjab,” Parvesh Verma alleged.

Bulldozers Back At House Of Jailed Noida Politician Who Abused Woman

Moment When Cheetahs Were Released Into Their New Home