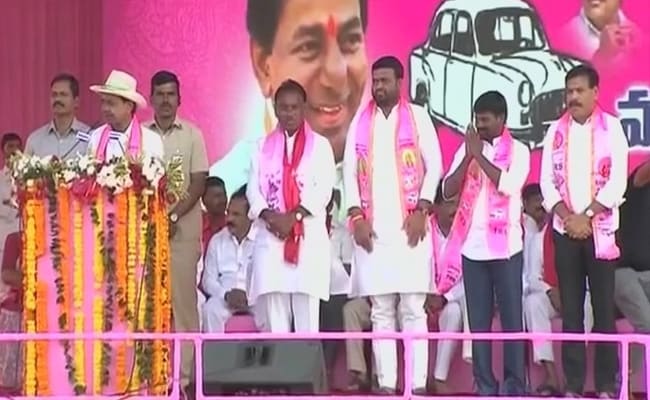 Telangana Chief Minister K Chandrashekar Rao today said “Delhi brokers” tried to bribe four MLAs of his Telangana Rashtra Samithi party, refering to Wednesday’s incident that took place at a farmhouse in Telangana. Accusing Prime Minister Narendra Modi of “encouraging this kind of politics”, he said he would ensure that “not a single vote from a weaver family” goes to the BJP.

The BJP has denied allegations of poaching, declaring that it was a drama “scripted, directed and produced” by the Chief Minister. The party has approached the court and the Election Commission.

“Some Delhi brokers came to challenge Telangana’s self-respect… They offered Rs 100 crores to four MLAs,” Mr Rao said at a public function today, parading on dais the four who had called in the police at the farmhouse, alleging an “Operation Lotus”. Three persons — one of them a businessman – were arrested.

The Chief Minister said because he speaks up, “They wanted to capture Telangana… I am telling farmers — when we vote, we must vote carefully. We cannot get bribed, cheated by such politics”.

On Wednesday, Telangana Rashtra Samithi MLA Pilot Rohith Reddy had filed a complaint with the police, alleging that Ramachandra Bharati and Nanda Kumar, both belonging to the BJP, had met him and offered him Rs 100 crore to join the BJP.

The complaint mentioned that they also threatened that if they failed to comply, criminal cases will be filed against them through Central agencies like the Central Bureau of Investigation.

The Moment Imran Khan Was Attacked At Pak Rally