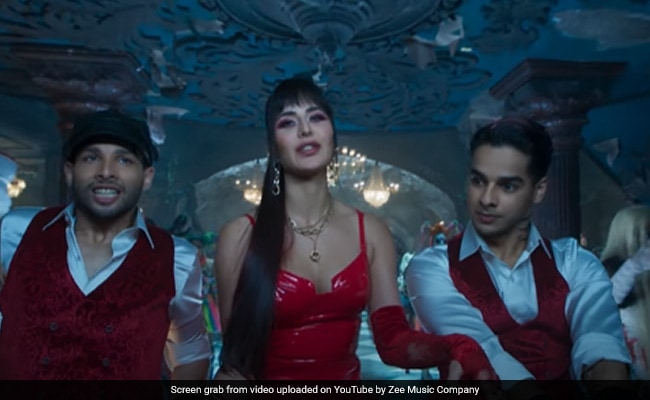 The makers of Katrina Kaif, Ishaan Khatter and Siddhant Chaturvedi’s Phone Bhoot released the film’s first song Kinna Sona on Thursday. The song, which is over two-minutes-long shows Katrina, Ishaan and Siddhant dancing in a gothic setup. In the song, Katrina can be seen wearing a gorgeous red dress and sporting a gothic look. The song starts with Katrina walking down in style, while Ishaan and Siddhant can be seen mesmerised by her beauty. A few frames later, the trio is seen dancing together to the song. The song is sung by Zahrah S Khan and Tanishk Bagchi. Tanishk has also given music to the song and written its lyrics.

Check out the song here:

Film’s stars Katrina Kaif and Ishaan Khatter too shared the new song update on their Instagram handles. Sharing the update, Katrina wrote, “Who let the ghosts out,” while Ishaan’s caption read, “This Halloween, we let the ghosts out get ready to groove with Kinna Sona Song out now.”

In the film, Katrina Kaif is playing the role of a ghost, while Ishaan and Siddhant are blessed with special abilities, which help them see and communicate with ghosts and spirits.

The makers of the film released the film’s trailer on October 10.

Spice Up Your 2-Minute Noodles With These 7 Exciting Recipes

Shehnaaz Gill Just “Had To” Dance With Vicky Kaushal To This Song. Watch