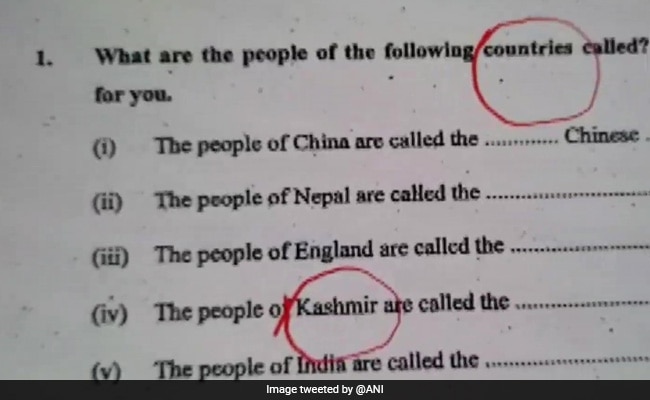 The question was allegedly asked to students in Araria, Kishanganj, and Katihar districts.

A Class 7 question paper in a school in Bihar allegedly contained a question that distinguished Kashmir from India, sparking a new controversy.

The Bihar government’s Education Department conducted midterm examinations for the students of classes 1-8 from October 12 till October 18.

In their English exam, the students of Class 7 were allegedly asked: “What are the people of the following countries called? One is done for you.”

This question was allegedly asked to the students in Araria, Kishanganj, and Katihar districts.

Meanwhile, educationists and BJP leaders have alleged the matter is a conspiracy and have sought a probe by the Union Education Minister.

Bihar BJP state president Sanjay Jaiswal took to his social media and shared the image of the question paper. “…Bihar government is still silent on my concern that they feel Kashmir as not a part of India. This question itself advocates that the officials in Bihar government consider Kashmir as a different country as Nepal, England, China, and India,” he wrote in a Facebook post in Hindi.

He further alleged that “Nitish Kumar is so restless with his desire to become the Prime Minister that they are inflicting anti-national question papers on the children of class 7.”

In 2017, a similar question was asked in Bihar and a student in Vaishali district had pointed out the error.

Diwali 2022: Eijaz Khan Got This Gift From Fiancee Pavitra Punia

Instagram Outage Across The World, Many Say “Accounts Suspended”

PM’s Mother Died At 3:30 am During Treatment: Hospital Statement