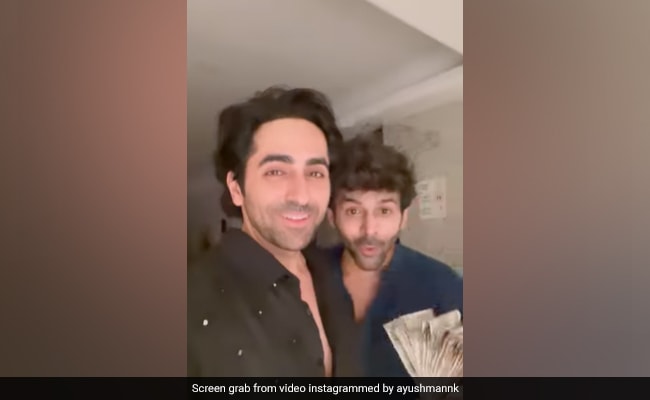 Kartik Aaryan had the most fun at Ayushmann Khurrana and Tahira Kashyap’s Diwali party hosted on Sunday night (going by Ayushmann’s latest Instagram entry). On Monday, the Badhaai Ho actor shared a video on his Instagram profile, in which Kartik Aaryan can be seen showing off a bundle of notes that he won in the games at the Diwali party. Ayushmann jokingly said in the video: “This man won money not only at the box office but also at the Diwali bash.” Kartik Aaryan’s ROFL reply to this was: “All this money should be given to Doctor G (Ayushmann’s recently released film).” The actor also urged his fans to go and watch the film. Sharing the video, Ayushmann Khurrana wrote: “Yeh aadmi chahta hai ki Doctor G ko box office par paise milne chahiye (This man wants that Doctor G should get the money at the box office).”

Meanwhile, Ayushmann’s wife and filmmaker Tahira Kashyap also shared a video from the Diwali party. This is what she shared.

Kartik Aaryan stepped into Bollywood debut with Luv Ranjan’s Pyaar Ka Punchnama and he has been a part of movies such as Pyaar Ka Punchnama 2, Kaanchi-The Unbreakable, Luka Chuppi , Guest Inn London and Sonu Ke Titu Ki Sweety. He also starred in Imtiaz Ali’s Love Aaj Kal, opposite Sara Ali Khan. He also starred in Netflix’s Dhamaka with Mrunal Thakur. Kartik Aaryan was last seen in the hit horror comedy Bhool Bhulaiyaa 2 co-starring Kiara Advani and Tabu. The actor will next be seen in Freddy with Alaya F. He will also be seen in Shehzada. He will also star in Satyaprem Ki Katha alongside Kiara Advani.