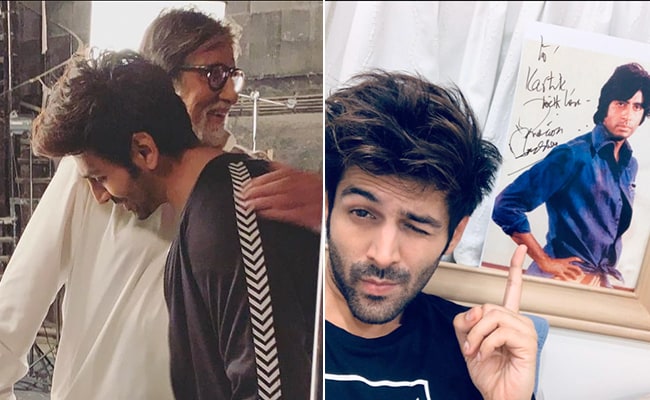 Kartik Aaryan decided to wish Amitabh Bachchan on his 80th birthday by posting snippets from one of his “happiest moments ever.” He shared a picture of the autograph signed by Big B. He shared pictures from his meeting with Big B from 4 years ago. He also posted a video, in which the legend can be seen signing an autograph for Kartik. The actor wrote: “4 years ago, One of the happiest moments ever, when I got an autograph from the Legend himself, on a picture of his iconic movie, which is undoubtedly my favourite too! Happy 80th Birthday Shehenshah of Indian Cinema. Keep blazing trails that we can only dream to follow in sir.”

Speaking of letters, Big B has quite a bit of reputation for sending appreciation notes to actors, especially fresh talent. Recently, Jaya Bachchan decided to surprise her husband on Kaun Banega Crorepati 14 sets, where she complained that she has never received a letter or flowers from Big B. Jaya Bachchan said, “Maine dekha to nahin hai magar suna hai ki aap jab kisike kaam se prabhaavit hote hain, ye svabhaav se, toh kuchh phool bhejte hai, chitthi bhejte hai. Waise aaj tak mujhe kabhi nahin bheji. Bheji hai? (I have not seen but heard that when you are influenced by some work, or by their nature, you send some flowers and letters to them. But you’ve never sent me one, have you?” To this, Amitabh Bachchan replied, “Yeh karyakaram toh sarvajanik horaha hai, yaar yeh galat hai (this show is going, this is wrong).”

In terms of work, Amitabh Bachchan was last seen in Goodbye with Rashmika Mandanna, Neena Gupta, Pavail Gulati and Sunil Grover. The film released last week. The veteran actor’s upcoming projects include the Hindi remake of the Hollywood film The Intern, along with Deepika Padukone. Earlier, late actor Rishi Kapoor was to star in the film. He will also be seen in Sooraj Barjatya’s Uunchai and a Nag Ashwin’s Project K with Prabhas and Deepika Padukone.

Rashmika Mandanna Enjoys This Yum Yum Dessert; We Are Drooling Too

Please Don’t Disturb Ajay Devgn, He’s In The “Middle Of Something Important”

“We Were Restricted By Covid”

At His Engagement To Ira Khan, Nupur Shikhare Took The Opportunity To Do This