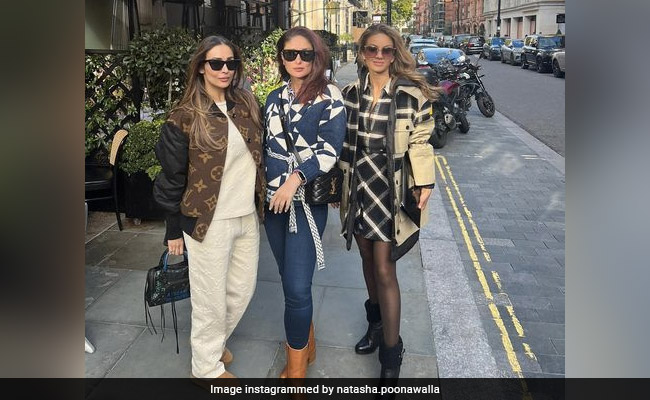 Natasha Poonawalla has shared a picture-perfect moment featuring herself, Kareena Kapoor and Malaika Arora on Instagram. Destination: London. The picture screams friendship goals. For those who don’t know, Natasha Poonawalla often hangs out with Kareena and her squad – Malaika, Amrita Arora, Karisma Kapoor and Mallika Bhat – whether they are in Mumbai, London or any other city. Sharing a glimpse of their well-spent Sunday, Natasha wrote, “Sundays done right…Girlfriends and my babies.” She also added a note for Karisma and Amrita, who were MIA. It read, “Missed my Karisma Kapoor and Amrita Arora.” Replying to the post, Amrita said, “Miss you, all.”

Whenever Natasha Poonawalla is in Mumbai, she visits Kareena Kapoor and her other friends. In August, she was spotted at fashion designer Manish Malhotra’s house with Kareena, Karan Johar and Karisma Kapoor. Check out the pictures here:

Along with Kareena Kapoor and Malaika Arora, her boyfriend and actor Arjun Kapoor is also chilling in London nowadays. Recently, Malaika posted a photo of him walking on the street with his “fashion game on point.”

Kareena Kapoor is shooting for her next with Ekta Kapoor and Hansal Mehta in London. See pictures from her work diaries.

Kareena Kapoor was last seen in Aamir Khan’s Laal Singh Chaddha, which opened in theatres in August. Her next film is The Devotion of Suspect X, in which she is sharing the screen space with Vijay Varma and Jaideep Ahlawat.

Shilpa Shetty And Raj Kundra Fasted For Each Other