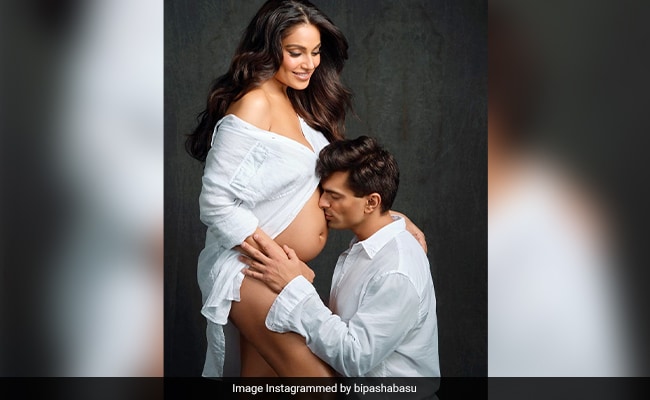 Karan Singh Grover shared a super mushy and adorable post for wife Bipasha Basu on Wednesday night. The actor posted an Instagram Reel, which was a curation of Bipasha Basu’s maternity photoshoot and it is simply stunning. He accompanied the post with the song Love You Still by Tyler Shaw. Karan Singh Grover added the hashtags #monkeylove and #parenthood. In the comments section, mom-to-be Bipasha Basu wrote: “My Everything,” along with a heart emoji. The couple announced their pregnancy on social media earlier this week.

The couple announced Bipasha’s pregnancy with a post on Tuesday. “A new time, a new phase, a new light adds another unique shade to our prism of life. Making us a little more whole than we used to be. We began this life individually and then we met each other and from then we were two. Too much love for only two, seemed a little unfair for us to see…so soon, we who once were two will now become three. A creation manifested by our love, our baby will join us soon and add to our glee,” read the caption.

Bipasha Basu met Karan Singh Grover during the shooting of the 2015 film Alone. The couple got married on April 2016 as per Bengali traditions. They later hosted a reception for their industry friends, which was attended by several Bollywood stars. The couple co-starred in the web-series Dangerous.

Karan Singh Grover, a popular TV star, has been a part of many TV shows including Dill Mill Gayye, Qubool Hai, Kitni Mast Hai Zindagi and Dil Dosti Dance, to name a few. He starred as Mr Bajaj on Ekta Kapoor’s TV show Kasautii Zindagii Kay 2 for some time. After he quit the show, Karan Patel stepped into his shoes.

Dobaaraa And 5 Other Taapsee Pannu Films To Watch

Bengali Actor Pradip Mukherjee, Who Was Directed By Satyajit Ray, Dies At 76