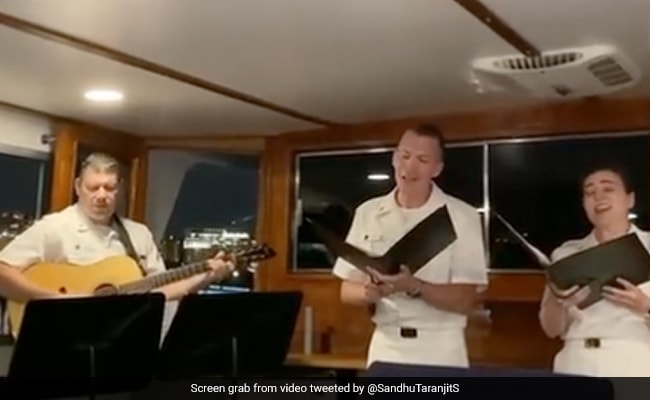 Karan Johar has reacted to the now-viral video of the US Navy, singing the Kal Ho Na Ho title track at a dinner party. In the video, three members of the US Navy are seen singing the Bollywood track on board a boat, in which, one of them is also playing a guitar. The video was originally shared by Taranjit Singh Sandhu, Ambassador of India to the United States, whose caption read, “Kal Ho Naa Ho… friend remains eternal… US Navy band enthralls with a popular Bollywood song. At the dinner hosted by US Secretary Navy SECNAV.”

And the song lives on @Javedakhtarjadu@iamsrk@Shankar_Live@EhsaanNoorani#Loy@nikkhiladvanihttps://t.co/rpuVKD7IHY

Many reacted to Karan Johar’s tweet. While a few of them praised the film and Shah Rukh Khan, others pointed out that Karan hasn’t tagged Sonu Nigam in his post.

The film, written by Karan Johar, is a love triangle between Shah Rukh Khan, Preity Zinta, and Saif Ali Khan. The romantic comedy with a collection of over Rs 860 million, was a commercial hit.

Ram Charan, In Japan For RRR’s Release, Shared This Pic

Deepika Padukone And Ranveer Singh, Twinning And Winning, At The Airport