Jharkhand Chief Minister Hemant Soren is under fire over awarding mining contract to himself.

A decision on his assembly membership in limbo for two months now, as the Governor stays quiet on possible disqualification over a mining contract, Jharkhand Chief Minister Hemant Soren has said he’s used to such threats since the beginning of his term.

“The government will complete three years soon, and we have always been ‘in danger’,” he told NDTV in an interview, “I am not worried about conspiracies. What can I say to troubled souls? The people have given us power, and we’ll complete our term.”

“Opposition in the state (BJP) is using the Raj Bhavan as a shield to score political points,” the Jharkhand Mukti Morcha (JMM) leader alleged.

The BJP, in power at the Centre and the main Opposition in Jharkhand, filed the complaint against Mr Soren over his awarding a contract to himself while in office. The Election Commission is learnt to have recommended his disqualification as MLA, but the Governor has not yet made the final decision — thus, uncertainty looms over the JMM-Congress alliance government.

“I am told there are two letters. Let the envelopes be opened in front of the people. The people will know how political opponents (of the BJP) are being harassed all over the country. Look at the condition of non-BJP governments,” he further said, speaking in Hindi. 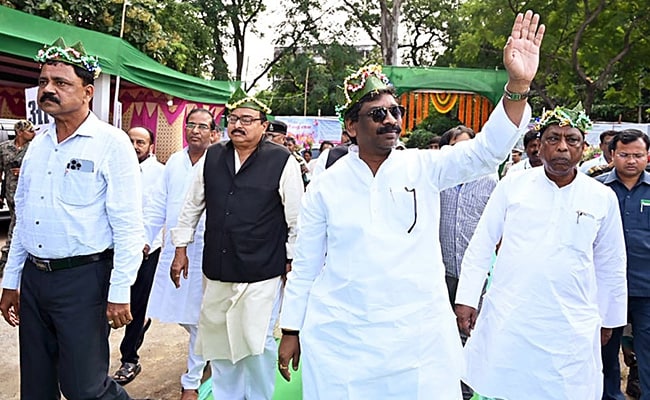 “I don’t care about speculations. We are doing our work, bindaas (with no worries),” he added.

On recent incidents of rape and murder in Jharkhand, he said, “These incidents are a social problem, and the administration acts as per the law. The courts deliver justice too. These are really unfortunate.”

Then he slammed the BJP’s central government over its approval to releasing 11 men convicted of rape and murder in the Bilkis Bano case from the 2002 Gujarat riots.

“I feel this is an undercurrent, a message, for people to carry out more such acts… Here we are arresting such people – father killing daughter, boyfriend killing girlfriend, people burning others to death – while the central government is [releasing convicts]. It’s a strange situation,” he said.

“You can imagine how those people, who make so much noise when such crimes take place here, are really like. They come here by planes, by trains, and gather people to play dirty politics, while releasing convicts elsewhere,” he said.

“When the central government takes such decisions, it has an unfortunate effect at the level of states too.”

On the effect of his possible disqualification on the pace of work, he said, “Only our rivals are affected. I have not let it hinder development in any way.”