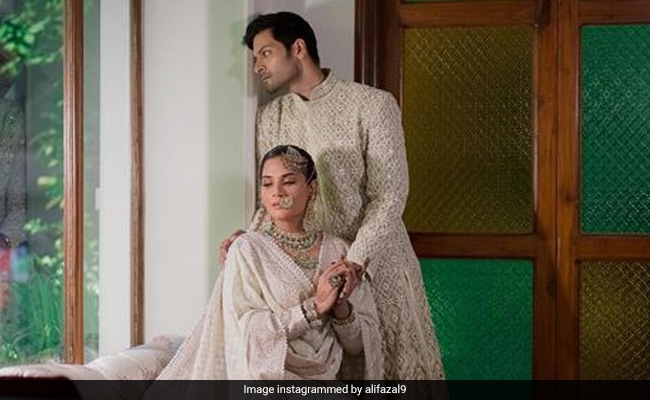 Ali Fazal, who recently celebrated his marriage to Richa Chadha with family and friends, opened up on a myth about marriage that he wants to prove wrong. In an interview with GQ, the actor said that in his life he has seen “very few marriages work” so he would like to prove it wrong. He added that everyone is flawed by nature and nothing can be perfect. However, one can try and flourish in it.  “I’ve seen very few marriages work in my life, so I’d like to disprove that,” GQ quoted the actor as saying.

Speaking about his wife Richa Chadha, Ali Fazal said, “But aside from that, there’s something spiritual I share with Richa. And I thank her for that because she’s made me more spiritually aware than I was before. I was all over the place; happy, but not centred, and I think that’s the whole idea; to find that and flow with it.”

He added, “We’re all flawed as human beings by nature, and nothing can be perfect. But you can try and revel in that flow, and hopefully flourish in it. All I know is that I will know this person for the rest of my days. I don’t know in what form, but I always know her; and that’s the best thing I could’ve asked for.”

Ali Fazal and Richa Chadha, who has been legally married for 2.5 years, celebrated their marriage with their families and friends. They hosted wedding festivities in Delhi and Lucknow for their family and close friends, and reception in Mumbai for their industry friends. Check out the pictures below:

“Richa Chadha and Ali Fazal have been legally married for 2.5 years when they registered their wedding. Currently, they are only celebrating as already mentioned by them on 29th September in their statement with friends and family. They have hosted their wedding receptions and parties in Delhi and Lucknow and are now doing a final event tonight in Mumbai,” ANI quoted the spokesperson as saying

How To Make Moong Dal Parcels - A Crispy, Protein-Rich Snack To Pair With Evening Tea