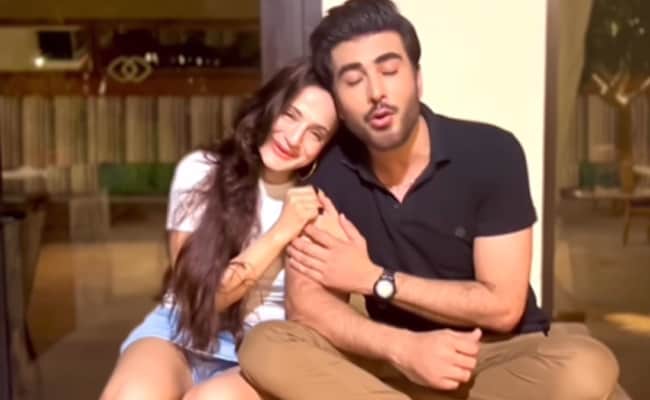 Ameesha Patel has been creating a heavy buzz on the Internet over dating rumours with Pakistani actor Imran Abbas since she shared a video on Instagram. Recently, in an interview with Hindustan Times, Ameesha rubbished the dating rumours and said that she had a “hearty laugh about it”. The actress added that Imran Abbas is her friend and revealed they studied together in the US. “I read them too, and had a huge laugh about it. The whole thing is just crazy and full of silliness. I was meeting my buddy after so many years. So, it was just a catch up,” Hindustan Times quoted the actress saying.

Ameesha Patel added, “We have known each other for many years, since the time I studied with him at a university in the US. And I have stayed in touch with most of my friends in Pakistan, who just love India. Abbas belongs to the film industry there, and we have a lot more to talk about. We met at the event and decided to catch up later, that’s when the video just happened organically. He happens to love that song of mine. It’s his favourite song… We just did an impromptu thing, which was recorded by a friend. It came out so cute, so we posted it. It was not planned.”

Ameesha Patel and Imran Abbas met during an event in Bahrain and recorded a video on the song Dil Mein Dard Sa Jaga Hai from her movie Kranti, co-starring Bobby Deol. Sharing the video, she wrote, “Having fun in BAHRAIN last week with my superstar friend @imranabbas.official … originally a song from my KRANTI w/ @iambobbydeol .. happens to be 1 of @imranabbas.official fav songs and mine .. filmyyyyyyness.” Soon after she shared this video, fans started speculating that they were dating.

Meanwhile, on the work front, Ameesha Patel will be next scene in Gadar 2 with Sunny Deol and Utkarsh Sharma.

Richa Chadha Offers A Glimpse Of Her Mehendi. Can You Spot Ali Fazal's Name In It?

Inside Pics From Kartik Aaryan’s Birthday Party With Ananya Panday, Vaani Kapoor And Others