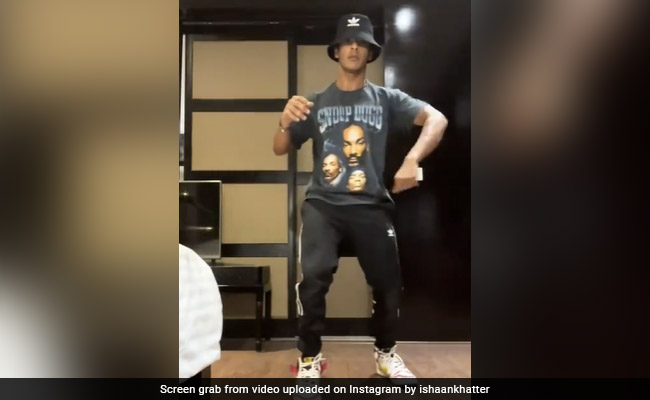 Ishaan Khatter has dedicated his latest dance video to Bollywood actor Hrithik Roshan. On Wednesday, Ishaan Khatter shared a video on his Instagram handle. In the video, the actor can be seen dancing to Hrithik Roshan’s Mai Aisa Kyun Hoon song from his 2004 film Lakshya. Sharing the video, Ishaan wrote, “Faaar from being as AMAZING as you were in this song sir but here’s my little impromptu tribute to the OG Hrithik Roshan. Will work hard to live up to your encouragement.” Ishaan in the video can be seen sporting a casual look.

Zoya Akhtar’s comment read, “Love the tee!” Whereas, Tanmay Bhat and Kubra Sait had something funny to write. Tanmay commented, “‘Main kya karu job chod du’ – bones in your body” (Do I quit my job – bones in your body). Kubra Sait wrote, “I’ll certainly have to return as a fly in order to move like that… Smooth.”

Actor Sanya Malhotra too commented on his post. She dropped a raising hands emoji on Ishaan’s post.

Many of his fans too commented on his post. One of them wrote, “You’re the next big thing in Bollywood for all the dancers out there,” while the other one wrote, “Bro is pro.” Many others dropped star-eyed and fire emojis in his post’s comment section.

Check out his “impromptu tribute” to Hrithik Roshan here:

Ishaan often shares videos of him dancing to many Bollywood numbers, mostly with his half-brother Shahid Kapoor.

Check out a few of his dance videos here:

On the work front, Ishaan Khatter is waiting for the release of his horror-comedy film Phone Bhoot, also starring Katrina Kaif and Siddhant Chaturvedi.

Other than Phone Bhoot, the actor will also be seen in Raja Krishna Menon’s Pippa, also starring Mrunal Thakur in the main lead.

When Amitabh Bachchan "Helped" Ishaan Khatter "Get Admission Into School"

A Scene From Deepika Padukone’s Gym. She Is “Working Really Hard.” Meanwhile, “Katrina Kaif Is…”