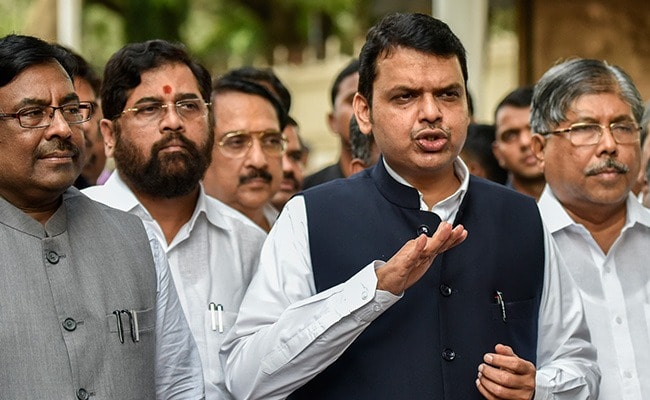 Hitting out at Mr Fadnavis, the Sena mouthpiece said he is continuously chanting the name of Balasaheb.

On a day when the Supreme Court referred the Sena vs Sena case to a larger Consitution bench, an editorial in the Shiv Sena mouthpiece took aim at Maharashtra Deputy Chief Minister Devendra Fadnavis for his repeated references to Sena founder Balasaheb Thackeray.

“Why are you seeking votes in the name of Balasaheb? Has your Modi era, Modi wave started receding?” an editorial in ‘Saamana’ asked.

Devendra Fadnavis has claimed he is working to fulfil the “dream” of Balasaheb Thackeray, which Sena said was a ploy to break the Marathi unity in Mumbai where civic polls are due.

Mr Fadnavis was sworn in as Deputy Chief Minister on June 30 after Sena’s Eknath Shinde, the current state Chief Minister, led the rebellion of 39 party MLAs against Uddhav Thackeray and received support from the BJP to form a new government.

The editorial said leaders like Devendra Fadnavis of the BJP are now embracing the “dream of Balasaheb”, but they did not remember the late Sena supremo while snapping ties with the party in 2014.

They did not remember the dreams of Balasaheb while going back on the word of the Chief Ministerial post to the Shiv Sena in 2019, it said.

“Fadnavis’s words are akin to the deceitful invitation of a fox, and people of Mumbai and Thane should be cautious,” the Marathi daily said.

“The language of ‘dream of Balasaheb’ used by the BJP is nothing but a ploy to break the Marathi unity in Mumbai and for that they are injuring the Shiv Sena,” it claimed.

Further hitting out at Mr Fadnavis, it said he is continuously chanting the name of Balasaheb.

“He is saying give us votes in the Brihanmumbai Municipal Corporation elections and we (BJP) will fulfil Balasaheb’s dreams. What is this sham? Which dream of Balsaheb are you going to fulfil?” it asked.

“Your dream of creating a split in the Shiv Sena, was it the dream of Balasaheb?” it asked.

The top court ordered the listing of petitions regarding the claim to the Shiv Sena before the constitution bench on Thursday and directed the Election Commission not to pass any orders on the Shinde faction’s plea that it be considered the real Shiv Sena and granted the party’s poll symbol.

“List the matter before the constitution bench the day after tomorrow and the bench will decide about the symbol related to the Election Commission proceeding at the beginning,” the bench comprising Chief Justice NV Ramana, Justices Krishna Murari, and Hima Kohli, said.

A five-member constitution bench will hear the plea on Thursday.

A Mixer With Your Crypto Cocktail? DeFi Dream Is Shaken, And Stirred