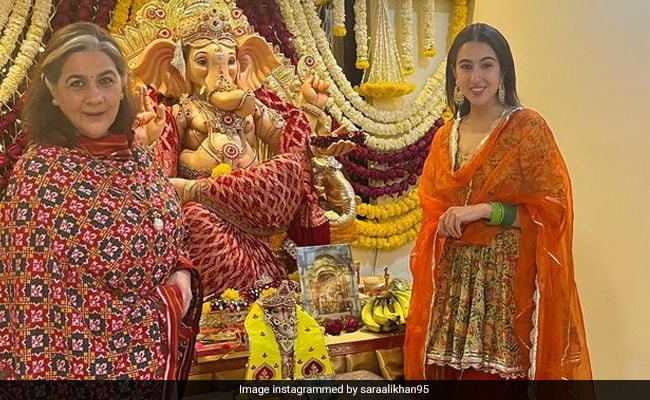 Sara with her mom. (courtesy: saraalikhan95)

Sara Ali Khan and her mom and veteran actress Amrita Singh dressed up in their festive finery for Ganesh Chaturthi and shared pictures from their festivities at home. Sara Ali Khan looked pretty as ever in an orange and gold ensemble, which she accessorised with statement earrings and some bangles. For the festive occasion, Amrita Singh picked a beige ensemble, which she paired with a printed dupatta. The mother-daughter duo can be seen happily posing in the set of pictures shared by Sara on Instagram. Sara’s brother Ibrahim was MIA from the pictures. “Happy Ganesh Chaturthi Ganpati Bappa Morya #duttacharaja,” Sara Ali Khan captioned the post. In the comments section, Sara’s aunt Saba Ali Khan wrote: “Mahsha’Allah. Happy Ganesh Chaturthi to you three.”

Sara Ali Khan frequently shares posts with her mom. In July, she went to Italy with Amrita Singh and posted pictures from Florence.

On Mother’s Day, Sara wished her mom with this post and wrote: “Happy Mother’s Day Mummy. Loved you since I was in your tummy. PS I love the fact that you’ve visited every set of mine. To make you proud is why I try to shine.”

Sara, who made her Bollywood debut in 2018, has featured in films such as Kedarnath (her debut film), opposite late actor Sushant Singh Rajput, Simmba, co-starring Ranveer Singh and Love Aaj Kal with Kartik Aaryan. She also featured in the Coolie No 1 remake, co-starring Varun Dhawan. Sara was last seen in Atrangi Re, co-starring Akshay Kumar and Dhanush.

How To Make Hyderabadi Kofta Curry For An Indulging Dinner