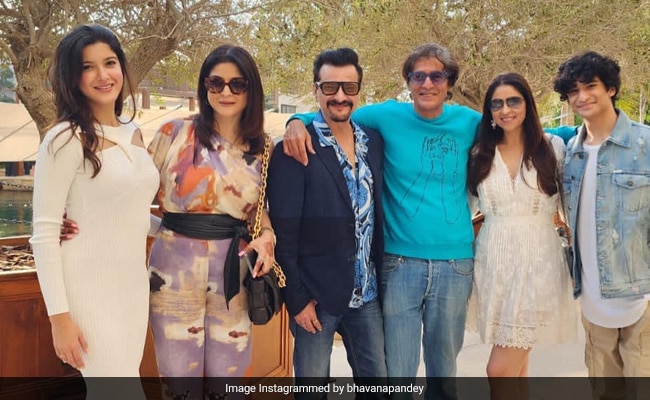 Sanjay Kapoor celebrated his sixtieth birthday on October 17 in Dubai. Ever since his family and friends have been constantly sharing pictures from his birthday celebrations. While, Sanjay’s wife Maheep Kapoor posted many pictures on her Instagram handle on his birthday and yesterday, on Wednesday, Maheep’s old friend and Fabulous Lives Of Bollywood Wives co-star Bhavana Pandey, who was also a part of Sanjay’s birthday celebrations, shared some pictures from his birthday night in Dubai. Sharing a couple of pictures, Bhavana wrote, “Dubai. Sanjay’s 60th. Friends and Family.” Her caption was accompanied by the hashtag Memories.

In the pictures, Bhavana can be seen posing with her husband and actor Chunky Panday in the backdrop of Burj Khalifa. In another picture, Bhavana can be seen posing with Maheep Kapoor, Sanjay Kapoor, her husband Chunky Panday and Maheep’s kids Shanaya and Jahaan Kapoor. One of the pictures also features her other co-star Seema Sajdeh from the Netflix series Fabulous Lives Of Bollywood Wives. Bhavana’s pictures also feature filmmaker-choreographer Farah Khan among others.

Bhavana’s post caught the attention of the birthday boy Sanjay Kapoor and his wife Maheep, who dropped hearts in the post’s comment section.

Actor Malaika Arora too reacted to the post and wrote, “So lovely” with a heart.

“My Baby Girl Is Growing Up Way Too Fast”

How Mrunal Thakur Wished Birthday To Her Sita Ramam Producer