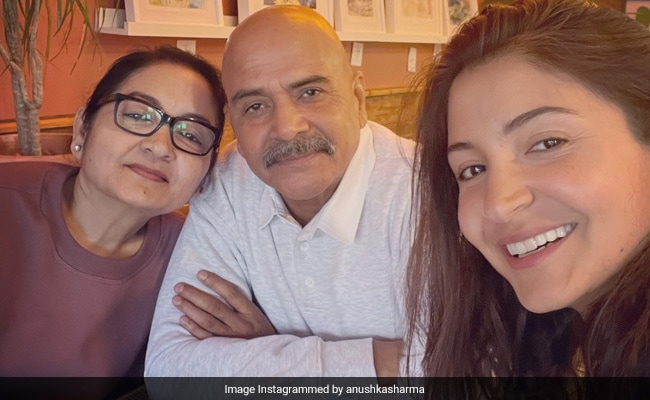 Anushka Sharma, who is busy shooting in London for her next film Chakda Xpress, took some time out to enjoy breakfast with her parents – Ajay Kumar and Ashima Sharma. On Tuesday, the actress dropped a bunch of pictures on her Instagram handle, in which she can be seen sitting in a restaurant with her parents. She also offered a glimpse of her coffee and croissants. The first image is a selfie featuring Anushka and her parents, happily posing for the camera. In the captions, she wrote, “Breakfast date with the parents”.

Soon after Anushka Sharma shared the post, her fans flooded the comment section with heart and love-struck emoticons.

A few days ago, Anushka Sharma dropped a video on her Instagram handle from the prep session for her upcoming movie, which is based on the life of cricketer Jhulan Goswami. The video features a montage of the actress practising on a cricket field and some BTS moments of Anushka dressed as Jhulan Goswami. Sharing the post, she wrote, “Here’s a glimpse into the Chakda ‘Xpress journey with our earnest director Prosit Roy”. Jhulan Goswami also shared the video but with a different caption. She wrote, “Striking the perfect balance between facts and fiction is a difficult feat but Prositroy makes it look like a walk in the stadium. Catch Anushka Sharma’s Netflix debut in Chakda Xpress. Coming soon.”

A week ago, Anushka Sharma shared the pictures of herself from a practice session and captioned it as: ” “Don’t be fooled by that smile.”

Helmed by Prosit Roy, the film is slated to stream on Netflix next year in February.

Abhishek Bachchan’s Expression In Sister Shweta’s Post Is Everything