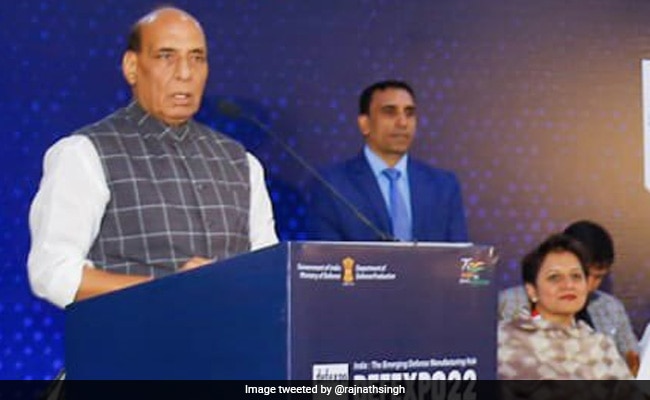 Rajnath Singh was speaking at ‘Invest for Defence’ at DefExpo in Gandhinagar.

The current era is a “golden period” of the Indian defence sector, said Defence Minister Rajnath Singh at Defence Expo in Gandhinagar on Thursday.

Mr Singh was speaking at ‘Invest for Defence’, the event organised during the 12th edition of DefExpo. The event was added to the Defence Expo from this edition onwards.

According to the Defence ministry, the event was organised to promote investment in the defence sector in the country by both the Indian industry and foreign original equipment manufacturers. It will also highlight the requirements of the armed forces and policy reforms undertaken by the government for ease of doing business in the defence sector.

“We have to create a healthy environment for our investors that will not only give them good returns but also recognition in domestic and global markets,” Mr Singh said.

To boost the domestic domestic sector, the minister said the government has allocated capital acquisition for defence procurement

“The government is aiming to increase Defence production from $12 billion to $22 billion by 2025. We are making all efforts to protect our domestic industry from unfair foreign competition in the domestic market. Simultaneously, we are making efforts to get market access for domestic business in foreign countries so they can capture markets outside India,” he said.

Mr Singh said, “Our defence industry is going through an important phase. Our industry has showcased its capabilities by manufacturing fighter aircraft, aircraft carriers, main battle tanks and attack helicopters. The current era is a golden period of the Indian defence sector,” he said.

These projects, the Defence Minister said have helped create an ecosystem and achieve valuable experience. This experience will help future generations to support and develop the defence system, he added.

The event also featured a panel discussion between the industry stalwarts, and the defence ministry and armed forces leadership.

It also witnessed participation from domestic and foreign institutional investors.

Diwali 2022: 5 Kaju-Based Sweets You Must Try This Festive Season