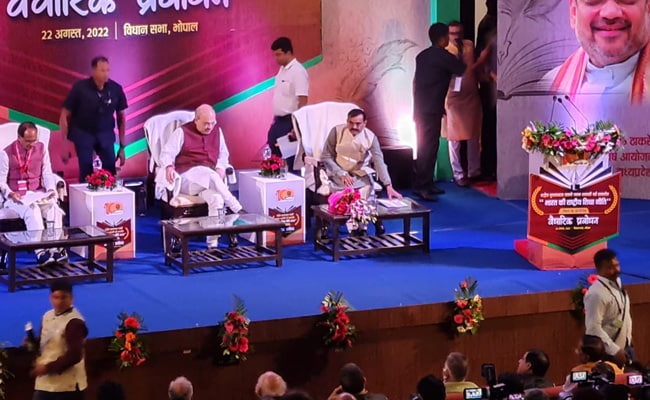 Union Home minister Amit Shah today said India is using only 5 per cent of its people’s talent due to its fascination with English. Using the entire talent pool irrespective of language, will make the country “shine like sun” in the international arena.

Addressing an event on the New Education Policy 2020 in the Madhya Pradesh Assembly in Bhopal on Monday evening, Mr Shah cited an example from the days he was embroiled in court cases.

“Many cases have been imposed on me by the Congress. I fought it back in courts. There were many good lawyers, whom I have seen countering the cases very expertly,” he said.

He also shared an anecdote from the time he was shifting from Gujarat politics to national politics.

“Those days, every morning, I spent four hours bolstering my Hindi through Hindi to Gujarati translation,” he said.

“When one of our leaders (who is no longer alive) came to know about it, he told me that instead of working so much on improving Hindi, I should focus on the English language. I told him that learning English was easier than improving Hindi and I don’t suffer from an inferiority complex of not being accepted for not knowing proper English. My aim is to make the country accept me on the basis of the language of my country,” he said.

India, he said, has “limited our development”, as the talent of 95 per cent children who study in their mother tongue remains unutilised.

He also claimed that unlike previous national education policies, there was no opposition to the NEP-2020, as suggestions of one and all were included in the new education policy.