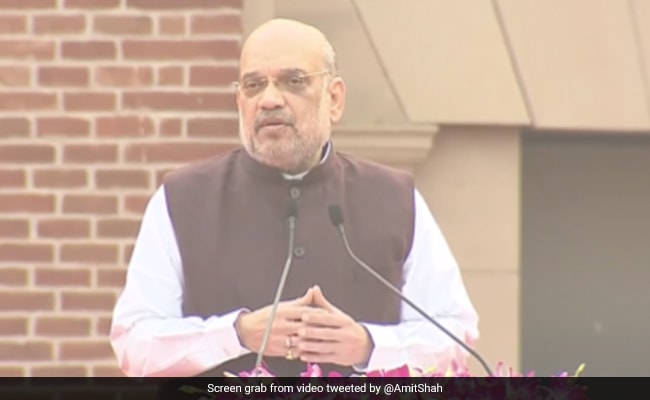 The home minister said students and children should read up on Sardar Patel.

The country would not have faced the many problems it is confronted with today had Sardar Vallabhbhai Patel been made India’s first prime minister, Union Home Minister Amit Shah said in Delhi on Monday.

Addressing students of the Sardar Patel Vidyalaya, Mr Shah also said the Modi government has worked to deepen constitutional and democratic values, and has strengthened the security of the country so no one can now dare cast an evil eye on India’s borders.

“Never leave your language. Learn all other languages from around the world but don’t leave your native language. Language is a form of expression and not of your intelligence. No one should have inferiority complex in not knowing English. You will have to keep your mother tongue alive,” he told the gathering which also included teachers and guardians.

In his address on the occasion of Patel’s 147th birth anniversary, Mr Shah strongly advocated the propagation of Indian languages and asked parents to speak to their children at home only in their mother tongue.

Talking about Sardar Patel, India’s first home minister, he said, “A man who is remembered long after his death can only be called great, that was Sardar… There is a public opinion in the country that if Sardar Patel was made the first prime minister of India, the country would not have faced the many problems it is facing today.” Mr Shah also recalled Patel’s role in bringing together and merging more than 500 princely states to the Union of Indian after Independence.

The home minister said students and children should read up on Patel to know about his vision for a united India with deep democratic roots.

“Sardar Patel was not only a man of imagination but he worked very hard to implement his vision… he was a ‘karmayogi’,” Mr Shah said.

He said Patel was the inspiration behind the Amul cooperative model, and it was the former home minister who worked to implement the cooperative movement on the ground in the country.

“Had Sardar Patel not been there, India’s map would not have been like it is today…he brought Lakshadweep, Jodhpur, Junagadh, Hyderabad and Kashmir together,” Mr Shah said.

The home minister said the idea of a united India would not have fructified without Sardar Patel, who received the highest number votes in the Congress Working Committee but sacrificed the position of the prime minister.

He said it was Sardar Patel who had laid the foundations of the central service, central police, intelligence bureau and many other institutions.

In his address to the students, the home minister said basic education should be imparted in the local language. He also urged them to keep their native languages and dialects alive.

Mr Shah said the 75 years of India’s journey has seen many difficult times when the country faced wars and other challenges.

The Modi government has worked to deepen Constitutional and democratic values and it has strengthened the security of the country, he said.

“Now, no one can dare cast an evil eye on India’s borders, and the government has also worked for all-inclusive development. We strengthened the economy, ushered in development and created infrastructure that will be made better over the next few years,” Mr Shah said.

The home minister said India, on the basis of its hard work, has become the fifth largest economy of the world, replacing England.

“We will have to decide now where our country will be in terms of research and development, health, infrastructure, security etc., when we celebrate the 100th year of our Independence,” he said.

At the outset of his speech, Mr Shah expressed his condolences to the families of those who died in Gujarat’s Morbi bridge collapse on Sunday, saying the entire country was saddened by the tragic accident in which many children also lost their lives.

Sardar Vallabhbhai Patel was born on October 31, 1875 at Nadiad in Gujarat.

The central government has been observing October 31 as ‘Rashtriya Ekta Diwas’ or National Unity Day since 2014 to foster and reinforce its dedication to preserve and strengthen the unity, integrity and the security of the nation.

As part of the celebrations, various programmes are organised across the country, recalling Patel’s contribution to the unification of India.

Meta Says “India Most Significant Country” For Its Platforms

PM On India's G20 Presidency Theme: "One Earth, One Family, One Future"

BJP In Power In Gujarat Due To Congress’s Incapability: Asaduddin Owaisi