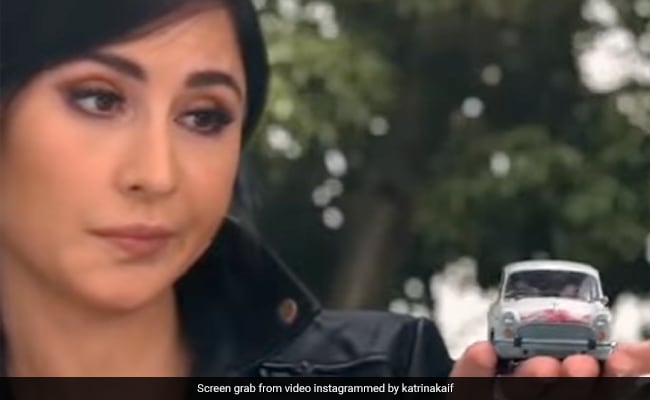 Katrina Kaif won’t let Ishaan Khatter and Siddhant Chaturvedi escape before the trailer release of their film Phone Bhoot. The trio have teamed up for a horror-comedy that is directed by Gurmmeet Singh. The actress has shared a video on Instagram just to remind us that the trailer will be out in three days. From Ishaan-Siddhant expressions to Katrina’s goofy avatar, the clip is super fun. Well, it is not just us, Katrina’s brother-in-law, actor Sunny Kaushal loved it too. In the comments, he wrote, “Hahaha! Love this.”  Fans are equally excited about Phone Boot. A person wrote, “Can’t wait for this.” Another said, “So excited for Phone Boot.”

Katrina Kaif, for the caption box, wrote, “Hey, where do you think you are going?”

Siddhant Chaturvedi has also shared the same video on his page and wrote, “Trying to reach safely to our destination in 3 days.” For the hashtag, he said, “Phone Bhoot Trailer.”

Before this, Katrina Kaif dropped a series of posters to announce the trailer release date of her much-awaited film. She said, “Incoming call… Phone Bhoot trailer releases on October 10. Stay tuned.”

Phone Bhoot is produced by Farhan Akhtar and Ritesh Sidhwani under their banner Excel Entertainment. The film will hit the theatres on November 4. The update related to the release date was shared by Katrina Kaif on Instagram. Along with a poster of the film, the actress wrote, “ Ringing in with an update. Phone Bhoot will now release on November 4 at cinemas near you.”

Apart from Phone Bhoot, Katrina Kaif will also be seen in Tiger 3 and Merry Christmas.

Meanwhile, Siddhant Chaturvedi will next feature in Kho Gaye Hum Kahan alongside Ananya Panday and Adarsh Gourav. Siddhant and Ananya were last seen in Shakun Batra’s Gehraiyaan. As for Ishaan Khatter, he has Pippa, directed by Raja Krishna Menon, in his kitty. It also stars Soni Razdan, Mrunal Thakur and Priyanshu Painyuli.

Watch: Extravagant Dosa With Host Of Ingredients Has The Internet Appalled

How To Make Shahi Sooji Halwa For Festive Season

Ahead Of IFFI 2022, Sara Ali Khan And Varun Dhawan Are Enjoying A Beach Day In Goa. See Post