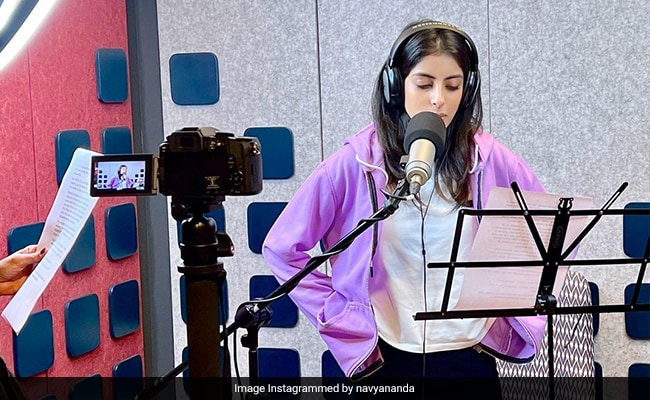 Entrepreneur Navya Naveli Nanda is no stranger to attention. As the granddaughter of Amitabh Bachchan and Jaya Bachchan – two of Bollywood’s most prolific names – Navya Nanda has always been the cynosure of all eyes. Over the years, Navya has built a considerable fan following on social media, often sharing updates about her professional and personal life. Now, on Tuesday, Navya shared an image of herself from a recording studio in which she is posing in front of a microphone. In the caption, she said, “Am I… a) Dropping a mixtape. b) Recording a podcast,” along with microphone and tape emojis.

A few days ago, Navya Naveli Nanda shared a throwback image with her brother Agastya Nanda on the occasion of Raksha Bandhan. “Happy Rakhi to you,” she said in the caption. Replying to the post, Suhana Khan, who will be seen with Agastya Nanda in The Archies, said, “So cute.” The siblings’ mom, Shweta Bachchan Nanda gushed about Navya and Agastya and said, “Puddings.” Maheep Kapoor replied to the post with heart emojis.

Before that, Navya Naveli Nanda dropped another image from her childhood. This time, she is pouting with cotton candy in her hand. In the caption, Navya wrote, “Sweet like sugar.” Responding to the post, Abhishek Bachchan said, “What about photo cred?” To this, Navya Nanda replied: “I forgot. Where did you find this?”

Before that, Navya Naveli Nanda also shared a picture of herself in a pink kurta-pyjama. Replying to the post, her granddad Amitabh Bachchan said, “So pretty, love.” While Suhana Khan said, “So preettttiii,” Ananya Panday wrote, “Prettiest,” with a heart emoji.

Navya Naveli Nanda is the founder of Project Naveli and the co-owner of Aara Health.

Liger Star Vijay Deverakonda On Calls For Boycott: "No Room For Fear"

Ishaan Khatter And Siddhant Chaturvedi Checked Into The Show Like This

Nothing Messes With Hina Khan’s Pool Time. Not Even Rain