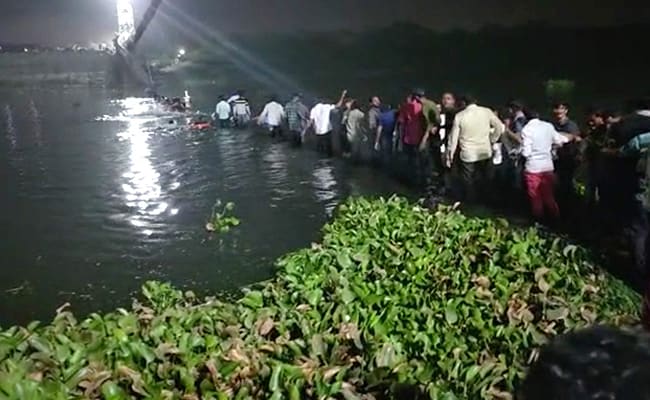 There were about 500 people on the bridge in the town of Morbi when it collapsed.

The Gujarat government takes responsibility for the bridge collapse in which 35 people were killed and several others injured, a state minister said on Sunday. The nearly century-old historic bridge had been closed for renovation and was reopened for the public four days ago.

There were about 500 people on the bridge in the town of Morbi and nearly a 100 of them fell into the Machchu River when it collapsed.

“The bridge was renovated last week. We are also shocked. We are looking into the matter,” Brijesh Merja, Minister of State, Labour and Employment, speaks to told NDTV.

Several videos showed dozens of people clinging onto the cables of the collapsed bridge as emergency teams and locals struggled to rescue them. Many others were seen swimming to safety, away from the partly submerged bridge.

“All top government officials are on the ground,” the minister added.

Authorities launched a rescue operation following the collapse, with divers deployed to search for missing people.

Prime Minister Narendra Modi, who is in his home state Gujarat for a three-day visit, announced a compensation of Rs 2 lakh for the families of each of those who died in the accident. He also spoke with Gujarat Chief Minister Bhupendra Patel and other officials regarding the incident. He sought urgent mobilisation of teams for rescue operations, according to the Prime Minister’s Office (PMO).

Amazon Freezes Hiring For Corporate Wing Of Its Retail Business