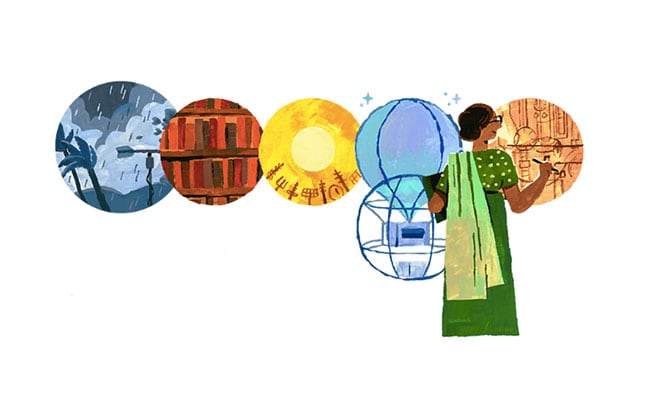 Google dedicated a special doodle to mark the 140th birth anniversary of Indian physicist and meteorologist Anna Mani who played a significant role in the field of meteorological instrumentation.

As history says, Anna Mani, who was born in a Syrian Christian family in Kerala in 1918, made many valuable contributions to the physics and meteorological field. Her research made it possible for India to make accurate weather forecasts and laid the groundwork for the nation to harness renewable energy.

Anna Mani, who is also known as the “Weather Woman of India” was the seventh of eight children in her family.

She also worked under the physicist and Professor C V Raman researching the optical properties of ruby and diamond.

Graduated in B.Sc Honors in physics and chemistry from P Pachaiyappas College in Chennai in 1939, she published five research papers.

In 1945, she went to Imperial College, London to pursue graduate studies in Physics.

After returning from London in 1948, Anna Mani joined India Meteorological Department in Pune, where she was responsible for arranging meteorological instruments.

In 1987, she won the INSA K. R. Ramanathan Medal for her remarkable contributions to science.

Sania Mirza Pulls Out Of US Open Due To Injury, Says "It'll Change My Retirement Plans"

Internet Suspended In 27 Districts Of Assam During Government Exam Hours