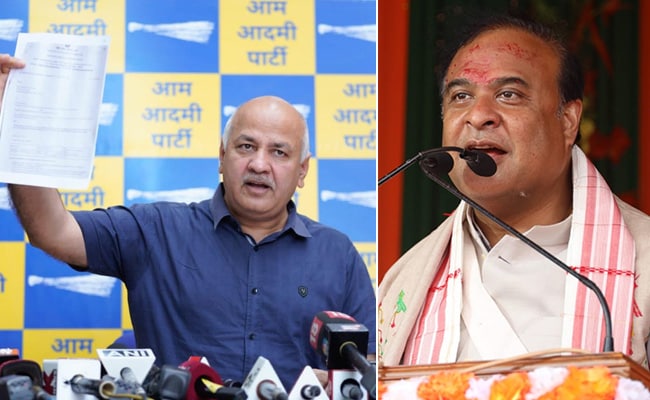 Manish Sisodia said the 2024 election will be a battle between the AAP and the BJP.

Mr Sarma said that the BJP will win by a bigger margin if Arvind Kejriwal is named the oppositon’s Prime Ministerial candidate to take on Narendra Modi in the 2024 election, because people in many states don’t know him.

“Good for the BJP if Arvind Kejriwal is the opposition’s face for the 2024 election because many have not even heard his name. We will win by a bigger margin,” he said.

On allegation by the AAP that the centre is trying to destroy the healthcare model initiated by Kejriwal’s party, the Assam chief minister maintained that Delhi’s ‘mohalla clinics’ cannot be a model for healthcare.

“If there can be at all a model (for healthcare), people should come down to Assam and see how in every district we are promoting a medical college.” “Delhi’s mohalla clinics cannot be a model. No one will come to India to see our healthcare facilities if mohalla clinics become the model,” he said.

The AAP has accused the BJP-ruled central government of “misusing” central government against its party leaders, alleging that they want to stop Arvind Kejriwal because work in the education and health sector is being discussed globally.

“The BJP-ruled central government is worried about Arvind Kejriwal because they see him as the prime challenger to Prime Minister Modi in the upcoming general election,” Manish Sisodia had said earlier today.

He claimed that the 2024 election will be a battle between the AAP and the BJP.

The CBI had carried out searches at Mr Sisodia’s home on Friday over the allegations of corruption in Delhi’s liquor policy.

Besides Manish Sisodia’s home in Delhi, 31 other locations were searched by the CBI across seven states. Mr Sisodia is number one on a list of 15 accused named in the CBI’s FIR on liquor policy violations.

The AAP has maintained that the raids were carried out because the centre was furious over the front-page shout-out to the Delhi education model in the New York Times on Thursday.

Mr Sisodia has denied any wrongdoing, claiming that the Excise Policy was implemented with complete transparency.

Delhi’s Lieutenant Governor VK Saxena had recommended the CBI probe last month,
accusing AAP of bringing the Excise Policy “with the sole aim” of benefiting private liquor barons for financial benefits to “individuals at the highest echelons of the government leading up to Manish Sisodia”.

Digilocker : 6 reasons why Digilocker is a must for NPS subscribers

National Cinema Day Postponed To September 23, Tickets To Be Available For Rs 75