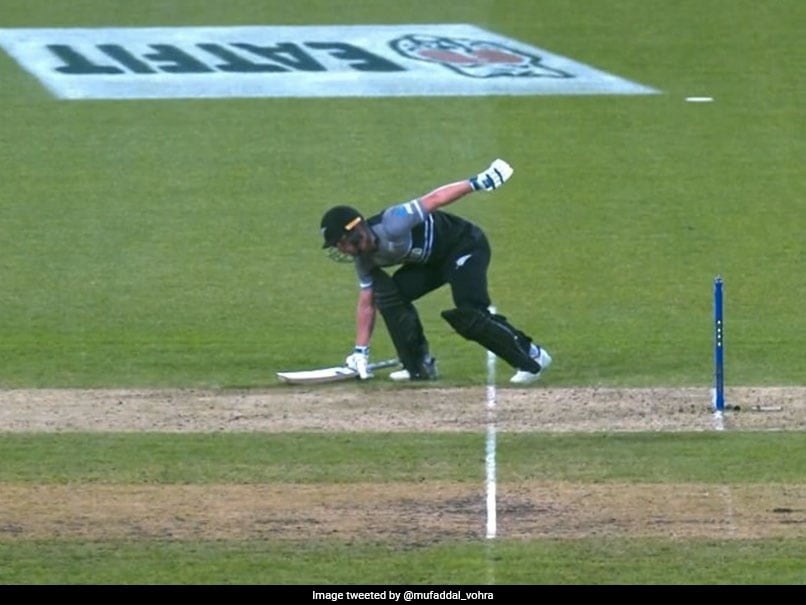 Right-handed batter Glenn Phillips was at his absolute best in the ongoing T20 World Cup Super 12 Group 1 fixture against Sri Lanka as he played a 104-run knock to take New Zealand’s total to 167/7 in 20 overs. Phillips brought up his century off just 61 balls and in his innings, he smashed 10 fours and 4 sixes. Allen came out to bat with New Zealand in a spot of bother at 7/2 in the 3rd over, but he along with Daryl Mitchell put on 84 runs for the fourth wicket to steady the ship.

During Phillips’ innings, one incident is being appreciated by fans on social media and it is regarding how the batter was backing up in the final over. The batter did not venture out of his crease when the ball was about to be delivered by the bowler, rather he took the guard like a sprinter.

Now, the video and photos of Phillips taking a unique guard are going viral on social media.

Further proof that this is the most him Glenn Phillips has been in his life is the ‘innovation’ that he has brought into running from the non-striker’s end. You think these things beforehand, and then try them when you have the confidence to.
Confidence allows you to be you. pic.twitter.com/M7cPQRdw7d

Phillips’ century against Sri Lanka was the second ton registered in the ongoing edition of the T20 World Cup.

Earlier, New Zealand captain Kane Williamson won the toss and opted to bat. However, the Blackcaps lost three inside the first four overs as Finn Allen, Devon Conway and Williamson all back in the dugout.

However, Phillips and Daryl Mitchell steadied their innings, adding 84 runs for the fourth wicket.

Samantha Ruth Prabhu Diagnosed With Myositis. "This Too Shall Pass," She Writes

This IT Firm Will Hire 1,000 Engineers In India Over Next 12 Months

For India, US Visa Processing Time To Become Shorter By Mid-2023

Woman Who Killed Boyfriend For Refusing To Break Up Attempts Suicide: Cops