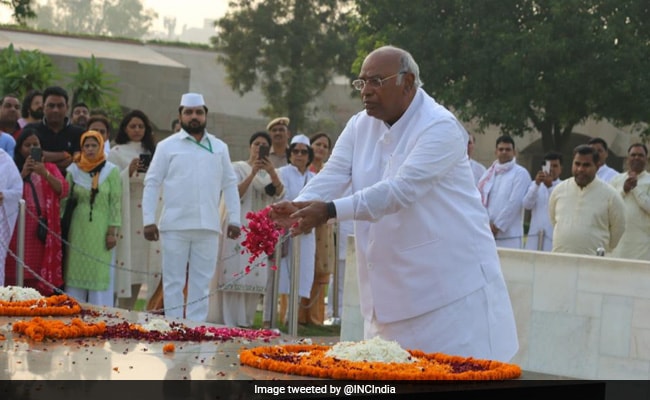 Veteran leader Mallikarjun Kharge will formally take over as Congress president today after he is handed over the certificate of election at a function here.

Hectic preparations were underway at the Congress headquarters on Tuesday for the ceremony where outgoing president Sonia Gandhi will hand over the reins to Mr Kharge, the first non-Gandhi to head the party in 24 years.

Mr Kharge defeated Thiruvananthapuram MP Shashi Tharoor in a direct contest for the top post in the grand old party after the Gandhis opted out of the race.

Ahead of his taking over, Mr Kharge called on former prime minister Manmohan Singh at his residence and spent some time with him.

Meanwhile, security personnel and workers made last-minute arrangements in the Congress president’s office and on the AICC headquarters lawns where a tent was being put up.

Chairman of the central election authority of the Congress Madhusudan Mistry will formally hand over the election certificate to Kharge at Wednesday’s function, which will also see the presence of Sonia Gandhi and Rahul Gandhi.

Mr Kharge, 80, takes charge of the party at a time when it faces a tough challenge from a formidable BJP led by Prime Minister Narendra Modi which has ousted the Congress from many states.

With the Congress now remaining in power in only two states — Rajasthan and Chhattisgarh — on its own and as a junior partner in Jharkhand, Kharge’s first challenge is to bring the party to power in Himachal Pradesh and Gujarat, which go to polls in the next few weeks.

Assembly elections in Himachal Pradesh will be held on November 12. The dates for the Gujarat polls are yet to be announced.

In 2023, Kharge will face the onerous task of leading the Congress in nine assembly elections, including in his home state of Karnataka where he was an MLA for nine terms.

Mr Kharge’s election also comes at a time the party is reeling under internal rumblings and high-profile exits after a series of electoral debacles and has been reduced to a shadow of its former formidable self.

Beginning his career as chief of the Gulbarga city council, Mr Kharge has also served as a state minister and a Lok Sabha MP from Gulbarga (2009 and 2014).

He is well-known for not losing an election barring the 2019 Lok Sabha poll from Gulbarga.

It was after that loss that Sonia Gandhi brought Mr Kharge to Rajya Sabha and in February 2021 made him the leader of the opposition.

Mr Kharge also faces the challenge of restoring the Congress’ primacy in the opposition space, implementing radical reforms the party pledged at the mid-May ‘Chintan Shivir’ in Udaipur and maintaining his independence in the face of insinuations that he is a candidate of the Gandhis and would seek their approval in all decisions.

The last non-Gandhi Congress president was Sitaram Kesri, who was unceremoniously removed in 1998 just after two years into his five-year term.

A leader with more than 50 years of experience in politics, Mr Kharge is also the second All India Congress Committee (AICC) president from Karnataka after S Nijalingappa and also the second Dalit leader after Jagjivan Ram to hold the post.