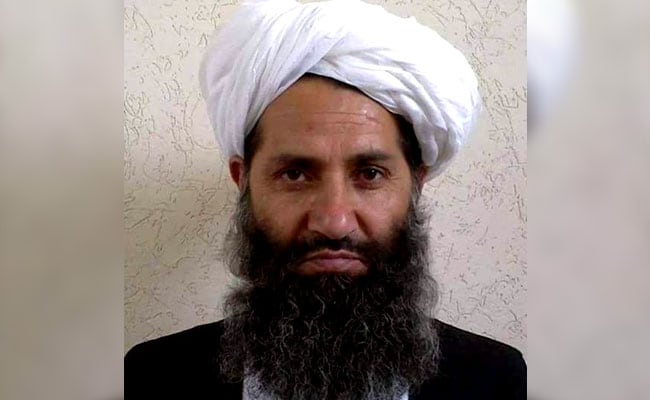 Around 3,000 people had gathered on Thursday in Kandahar, where Haibatullah Akhundzada is based. (File)

The Taliban will deal with the international community in line with sharia law, the supreme leader of the hardline Islamist group said, according to a copy of his speech shared by the information ministry on Friday.

Yet to be formally recognised as a government by any foreign capital, the group is struggling with a severe economic crisis due to strict enforcement of international sanctions and the cutting off of development aid.

Many governments, including Washington, have put pressure on the Taliban to ease its restrictions on women and to open schools for high-school aged girls.

Around 3,000 tribal leaders, officials and religious scholars had gathered in the southern city of Kandahar, where the group’s supreme spiritual leader Haibatullah Akhundzada is based, on Thursday, according to state-run news agency Bakhtar. It was the second such gathering since the group took power around a year ago.

“This meeting is called to think about the freedom we received by the blessing of Allah, which we achieved from the blood of our mujahideen (fighters),” he said in the speech.

“We will deal with the international community as per Islamic Sharia.. if Sharia doesn’t allow it, we will not deal with any other country,” Akhundzada said.

Talks with U.S. diplomats have continued, in particular over how to revive the country’s stalled banking sector and the possible release of frozen central bank assets held overseas. But officials have cautioned that many hurdles remain to any progress.

In an escalation of tensions, the United States last month carried out a drone strike in central Kabul to kill al Qaeda leader Ayman al-Zawahiri and accused the Taliban of violating an agreement between them by sheltering Zawahiri.

Thursday’s gathering issued several resolutions, according to Bakhtar news agency, including one condemning the drone strike and another saying any neighbouring country that allowed the use of its airspace for the strike was complicit.

The United States usually needs to receive permission from neighbouring nations to access landlocked Afghanistan via air. Officials have not disclosed the drone’s travel path. Pakistan, which shares a border with Afghanistan, has said its airspace was not used for the attack.

Several resolutions have been issued, according to Bakhtar news agency, including one holding neighbouring countries involved in the drone strike complicit.

US Citizen Sentenced To Death In China For Murder Loses Appeal