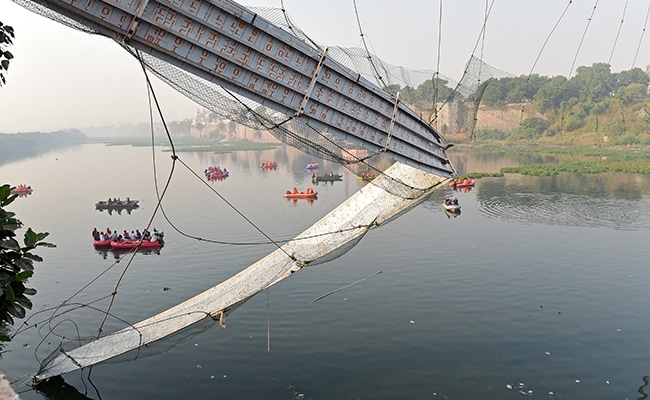 On Sunday, the suspension bridge above the Machchhu River in the Morbi district collapsed.

The Oreva company in Gujarat’s Ahmedabad has locked their farm after the Morbi bridge in the state collapsed claiming the lives of over 130 people. Oreva is the company that renovated the Morbi bridge.

Nine persons including officials of Oreva, ticket sellers and security men have been arrested on Sunday under various sections of the Indian Penal Code (IPC) for the Morbi bridge collapse in Gujarat.

On Sunday, the suspension bridge above the Machchhu River in the Morbi district collapsed. Visuals showed people falling into the river below.

Gujarat Home Minister Harsh Sanghavi said that a criminal case has been registered in connection with the incident.

A First Information Report (FIR) has also been filed by the Gujarat Police in the bridge collapse incident in Gujarat’s Morbi district against private agencies for the attempt to commit culpable homicide and culpable homicide not amounting to murder.

The Gujarat government has constituted a five-member committee headed to probe the bridge collapse incident.

The police also informed that the management person agency did not take due care and quality check of the bridge and kept it open for the people on October 26, displaying severe carelessness.

As per reports, the bridge was closed for about 8 months for maintenance and the repair work was being completed by a private agency.

State-wide mourning in Gujarat will take place on November 2, for the people who died in the Morbi tragedy. The decision was taken at a high-level meeting held at Gandhinagar Raj Bhavan chaired by Prime Minister Narendra Modi.

In the tragic incident of Morbi bridge collapse on Sunday, over 130 people, including women and children, were killed and over 100 have been receiving treatment for the injuries sustained after a cable suspension bridge in Morbi town collapsed.

Video: Man’s Wait For Missing Couple At Hospital Sprucing Up For PM

sun pharma share price: Does Sun Pharma’s result indicate what to expect from the pharma sector?

Complaint Filed Against Rahul Gandhi For His Remarks On Savarkar

JNU Campus Temporarily “Out Of Bounds” For Students Involved In Clash