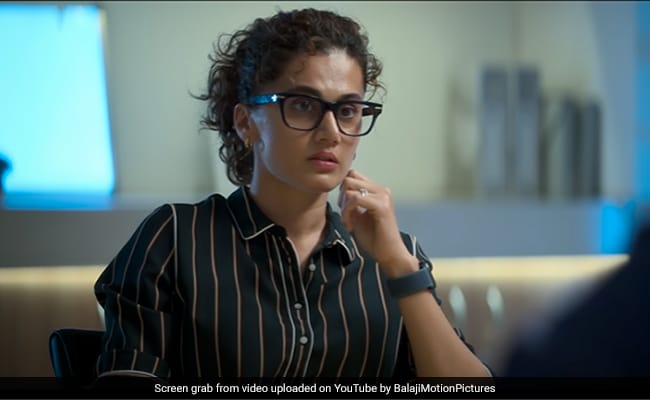 An electrical storm of the exact scale and nature of another one that struck a quarter century ago sparks a channel of communication between a schoolboy who died in 1996 and a woman who, in 2021, moves into the house that the former lived in with his mother. On that captivating premise hinges Dobaaraa, a well-acted, nimbly crafted time-loop thriller.

The mindbender, a remake of a 2018 Spanish murder mystery, is adapted by screenwriter Nihit Bhave and helmed by Anurag Kashyap. The latter taps into a few key elements of his filmmaking style and reins in some others to deliver a jaunty head-scratcher that thrives on a complex, if not particularly deep, interweaving of timelines and dimensions of existence.

The smartly lensed Dobaaraa isn’t always electrifying, but it is consistently entertaining and engaging. It blends the fallout of the space-time continuum gone awry with the far simpler conventions of a crime thriller. Anurag Kashyap gets much of it right even when the going isn’t entirely smooth.

Employing sure-handed methods and banking on a strong pivotal performance by Taapsee Pannu, the director teases a completely new beast out of the narrative material drawn from Oriol Paulo’s Adriana Ugarte and Alvaro Morte starrer Mirage.

This is the third Hindi remake of an Oriol Paulo movie in four years. Sujoy Ghosh turned The Invisible Guest (2016) into Badla (starring Pannu alongside Amitabh Bachchan) and Jeethu Joseph reshaped El Cuerpo (2012) into The Body. Badla and The Body, both released in 2019, had foreign settings and sought to stay as close as possible to the ambience of the original films

Dobaaraa, set in a Pune suburb, sticks in the main to the Mirage storyline but is anything but a slavish copy. Informed with style, verve and a distinct directorial imprimatur, Kashyap’s lively version pits humans against each other in baffling mind games amid a thunderstorm of scarily disruptive proportions.

Strong on atmospherics, as aspect of the film bolstered appreciably by Sylvester Fonseca’s cinematography, Dobaaraa banks not so much on dread as on sustained intrigue. It is a nifty remake that quickly draws the audience in and commands rapt attention. Spry, stylish and swift on its feet, it foxes and fascinates by turns with its fluid juggling of time, space and reality.

As the story unfolds, Dobaaraa wends its way into domains where questions outnumber answers and where perceptions are repeatedly blurred as they are thrown into a spiral of confounding contradictions.

An avoidable death that occurred in the mid-1990s and a fortuitous opportunity two and a half decades later to change an individual’s destiny are at the centre of the plot. As the story swivels on its mystifying axis, dangerous lies, dark secrets, illicit liaisons and shifting veracities tumble out of the shadows.

A boy – an inveterate Terminator fan who, in one scene, sports a T-shirt that announces “I’ll be back” – videotapes himself on a stormy night. While he is at it, he hears a commotion next door, sneaks into the house and finds the wife of his surly neighbour (Saswata Chatterjee) lying dead on the floor. The man has a bloody knife in his hand. The alarmed boy makes a dash towards the street. Tragedy strikes.

The boy is indeed back via an old television set, a camcorder and an incomplete video recording found abandoned in a storeroom. But can the fate that befell him be altered? The lady who has just acquired the house stumbles upon a means to reach out to the boy and warn him of what lies ahead. The watch shows 2:12 AM – that is from where the film’s title, Dobaaraa, stems.

Dobaaraa hinges on a riveting, matter-of-fact interplay of past and present. The female protagonist, a nurse who moves into a new home with her husband and six-year-old daughter, is caught in the perplexing whirligig. As certitudes vanish from her life and her own identity is under a cloud, she grapples with putative truths that may only be figments of her imagination

The effortless ease with which Taapsee Pannu plunges into the trippy film merits unstinted applause. The character she plays is not only caught between two different points in time decades apart, but is also transported abruptly into a dimension where what she has always known to be a fact is warped beyond recognition. She conveys the resultant bafflement without missing a beat.

In one reality, she is a mother to a girl and a medical nurse, in another she is a highly regarded surgeon in desperate search of her missing daughter. In the latter timeline, she runs into many a wall because nobody recognizes who she is.

Dobaaraa revolves around dysfunctional marriages, cheating husbands and home-breaking women. While it deals with the frailties of humans faced with temptations of the flesh and the unstoppable force of the elements, the film does not look to probe big moral questions.

But with its skewing of realities and the effect it has the mind of a woman who has ended up in a state that she cannot fully comprehend, it adds up to an intriguing and fast-paced ride through a haze that hangs over the mind that takes its time to lift, pretty much like the ominous clouds in the sky.

Pavail Gulati as a cop investigating the ‘disappearance’ of the protagonist’s daughter and Rahul Bhat in the role of the tormented heroine’s shifty husband in one of the two realities that she occupies deliver splendid turns. Veteran actor Nassar has a significant cameo as a veteran doctor whose presence is crucial to the harried heroine’s attempts to decode the puzzle that she finds herself trapped in.

What is especially striking about Dobaaraa is that it makes no major concessions to the audience by resorting to overt explication of the phenomenon that triggers the female protagonist’s predicament although, admittedly, parts of the film are rather easy to decipher. The occasional obfuscations inherent in the plot only serve to heighten the suspense and enhance the film’s ability to catch the audience by surprise. It does that often enough to keep us invested all the way.

Dobaaraa And 5 Other Taapsee Pannu Films To Watch