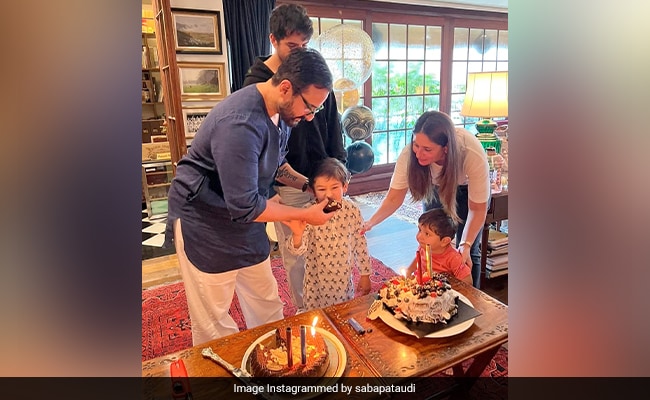 Saif Ali Khan’s sister Saba Ali Khan has shared some pictures from the actor’s birthday bash. Well, the images are similar to what Soha Ali Khan shared on Saif Ali Khan’s birthday, but what caught our attention were the caption and the last image. In the first image, Saif is happily posing for the camera with his family, including wife Kareena Kapoor and sons – Ibrahim, Taimur and Jeh, while in the second, he can be seen cutting a cake. However, do you know who got to eat the cake? Answer: Everyone except the birthday boy Saif and seeing the last image, it seems Taimur got the biggest bite.

Sharing the post, Saba captioned it as: “16th August…..Unfinished saga. Did u know ….? The cake was lit….The cake was cut, But who got to eat it??;) Ah! The last pic! Actually… we’re all supposed to feed the birthday boy! Instead he ACTUALLY gave US a bite!! The end of that. We missed U Sara!”

Saif Ali Khan celebrated his 52nd birthday on August 16, and to make it more special, Kareena Kapoor shared some hilarious pictures of Saif on her Instagram handle and captioned it as: “Happy Birthday to the best man in the world You make this crazy ride crazier and God I wouldn’t want it any other way… These pictures are proof  I love you my Jaan and I have to say your pout is way better than mine…What say guys?”

Meanwhile, on the work front, Saif Ali Khan is gearing up for the release of his upcoming movie Vikram Vedha, co-starring Hrithik Roshan. It is slated to hit the theatres on September 30.

Mrunal Thakur Is In "DND Mode" As She Visits Chicago. See Pics