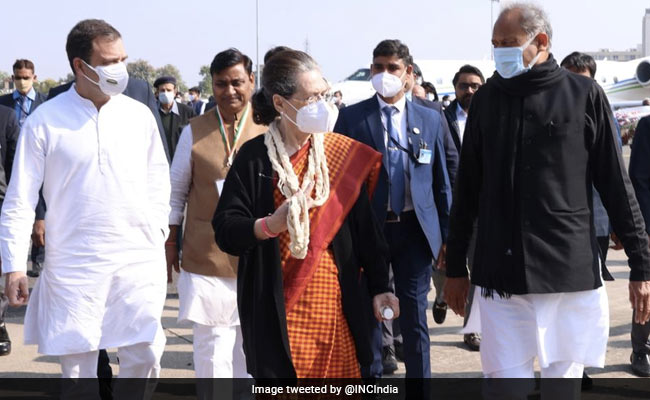 Ashok Gehlot, the Chief Minister of Rajasthan, today denied that Sonia Gandhi had offered him the chief’s post.

“I’m hearing this from the media. I don’t know about this. I’m fulfilling duties that have been assigned to me,” Mr Gehlot told reporters in Gujarat.

A report in The Hindu said Sonia Gandhi, before flying abroad for a medical check-up, spoke with Mr Gehlot on Tuesday in a closed-door meeting and asked him to take over.

The Congress has to elect a new chief by September 20.

Rahul Gandhi has refused to return as Congress president after he quit over the party’s defeat in the 2019 national election. He has reportedly asserted that it is time for a non-Gandhi to step up.

Sonia Gandhi has said she can’t continue in the role because of her poor health.

Amid speculation that he leads the list of the “non-Gandhi” options before the party, Mr Gehlot had said earlier this week that Rahul Gandhi must respect the sentiments of Congress workers and accept the top post.

“If Rahul Gandhi does not become the party president, it will be a disappointment for the Congressmen in the country. Many people will sit at home and we will suffer. He (Rahul Gandhi) should accept this post by himself, understanding the sentiments of the common Congress people in the country,” said Mr Gehlot, whose name is also in circulation as the party looks for a non-Gandhi option for the top post.

“The unanimous opinion is in support of his becoming the president. So, I think he should accept it. It is not about Gandhi or non-Gandhi family. It is the work of the organisation and no one is becoming a prime minister,” he said.

The Congress is already running a few days late to start its internal election. The schedule may be announced later this week after a meeting of the Congress Working Committee (CWC), which will be attended virtually by Sonia Gandhi.

For almost a quarter of a century, the Congress has been led by a Gandhi – either Sonia Gandhi or her son Rahul.

All Books On Manipur Will Now Require Government Approval Before Publication