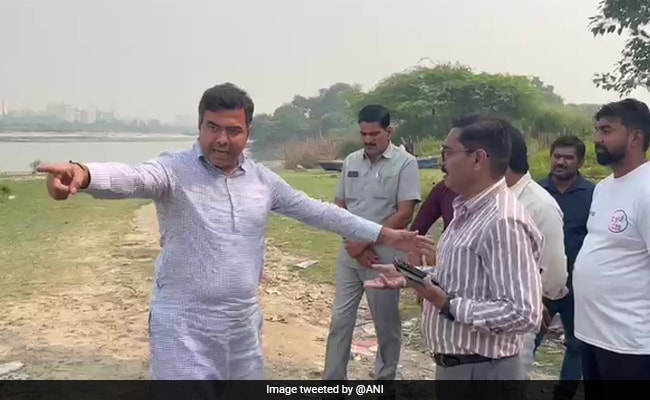 BJP MP Parvesh Verma speaking to officials by the Yamuna in Delhi on Friday.

A Delhi Jal Board official has filed a police complaint against the BJP’s West Delhi MP Parvesh Sahib Singh Verma and party leader Tajinder Singh Bagga for allegedly “intimidating” him while supervising the use of an anti-foaming substance on the Yamuna at Kalindi Kunj.

According to Mr Sharma’s complaint, Parvesh Verma used “very foul language and misbehaved with me. He is also spreading the false propaganda that I along with officers of the DJB are poisoning the water of the Yamuna river”.

This process — spray of anti-foaming substance — is duly approved by the DJB and has also been recommended by the National Mission on Clean Ganga under the Union Ministry of Jal Shakti, the complaint stated.

Mr Sharma claimed that Mr Verma along with Mr Bagga and some of his associates stopped him from carrying out his duty and threatened him.

“This act of Mr Verma is an assault on an honest and upright government servant like me and cannot be accepted. It has demoralised and scared me and all my colleagues,” he said, requesting the police to register an FIR in the matter.

In a video shared widely on social media, Mr Verma was seen shouting at the DJB official during a visit to a Chhath Puja site at Bhola Ghat downstream the Okhla Barrage. Mr Verma is seen purportedly asking the official if the anti-frothing chemical be poured on him.

A Owaisi's Party AIMIM Is BJP's B Team, Says Tejashwi Yadav Ahead Of Bypoll